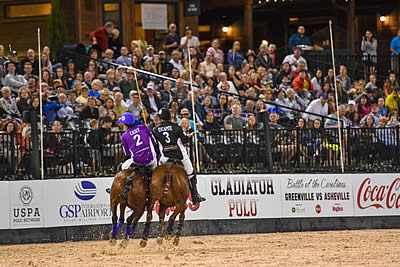 The fun will begin each evening at 6:00 p.m. with TIEC’s signature entertainment including free carousel and pony rides, face painting, live music, Gladiator-inspired activities, and more. There will be an exclusive autograph signing session with players in the front of Legends Plaza before the game, as well as a player Meet-and-Greet after the game at the Silo Bar. Fans of all ages can enjoy an authentic Argentine Asado buffet from 6:00 p.m. until 10:00 p.m. in the Legends Club. The first Gladiator Polo™ match of the season will start at 8:00 p.m. Tryon Resort’s onsite shops, restaurants and bars will be open throughout the night. General admission and parking at Tryon Resort are free.

“Our organization has been very excited to announce the Gladiator Polo™ schedule for this season at TIEC. We received such a tremendous response to the tournaments we hosted last year and wanted to ensure top tournament play remains on the event calendar here for many years to come,” said Mark Bellissimo, CEO of International Equestrian Group (IEG) and managing partner of Tryon Equestrian Partners (TEP). “Gladiator Polo™ has allowed us to bring more focus and attention to the sport of polo, which has been our mission since getting more heavily involved with the sport two years ago. We anticipate a very competitive season this year and are eager to welcome our Gladiator Polo™ fans back to the venue in June.”

During Gladiator Polo™ matches, two teams of three players are pitted against each other in an enclosed arena, giving spectators an up close and personal look at the action. In this Roman-themed event, horse and rider teams wear distinctive colors – from the players’ helmets all the way down to the horses’ leg wraps – making it easy for spectators to follow the game and cheer on their favorite team.

The game consists of six chukkers, or six periods of five minutes each. Riders change horses at the end of each chukker. Gladiator Polo™ does not require the large number of horses to play that outdoor/grass polo demands. Many Gladiator Polo™ players use five to six horses in their string as opposed to the traditional ten to twelve.

The Gladiator Polo™ ball is similar to a mini soccer ball, larger than the small and hard plastic ball used outdoors. While the larger size gives the new player confidence in learning to hit the ball, proper technique is necessary because the arena game is played on a dirt surface with the ball bouncing on the uneven surface and off the arena wall.

Unlike traditional equestrian competitions where audience participation is encouraged only before and after a rider competes, Gladiator Polo™ is fueled by a rowdy crowd. Spectators are encouraged to cheer on their favorite team throughout the entire match.