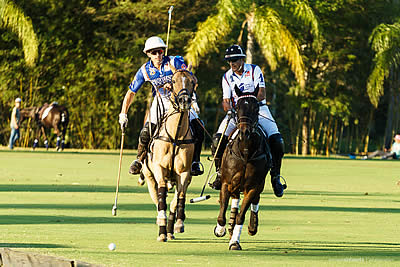 Wes Finlayson on the Provident Jewelry team races Marwan Mohey-El-Dien, of team Invicta, to the ball.

Polo match supports Brooke USA’s efforts to help working equines and the people they serve in the developing world.

WELLINGTON, Fla. – March 24, 2019 – Brooke USA’s Sunset Polo™ & White Party kicked off a weekend birthday celebration for Hope Arellano. She serves as an ambassador for the organization and played for the winning team, GJ Racing, and was named Most Valuable Player (MVP). The next day Arellano played in the U.S. Open Women’s Polo Championship final, and Sunday she turned 16 years old.

“It was super fun! I had a blast playing with everyone,” she said after the event at the Wanderers Club. “Brooke USA is a great organization, and I was very pleased to be able to play in a game that benefited them.”

Brooke USA strives to improve the welfare and alleviate the suffering of working horses, donkeys and mules and the people they serve in some of the world’s poorest communities.

Three 8-goal teams competed in the six-chukker round robin tournament composed of three two-chukker games. GJ Racing won the first two chukkers 4-1 over Provident Jewelry, the defending champion. Provident Jewelry’s Henry Porter made the first goal of the game with a midfield missile straight into goal.

The first chukker closed with a goal by former 8-goal player John Gobin, who ran the ball in from a distance and scored on a cut shot for GJ Racing. In the second chukker, he assisted on two Arellano goals. With 30 seconds left in the second chukker, Arellano made the winning goal of the first round. It was a complex play, with Porter on a breakaway until Arellano ran him off it and scored.

Round two (chukkers three and four) was a 2-1 victory for Provident Jewelry over Invicta. Matías Gonzalez sent a pass to teammate Justin Daniels, who made a long run to goal for Invicta. Sam Farahnak and Wes Finlayson, a Brooke USA ambassador, each scored for Provident Jewelry in the fourth chukker. Finlayson, who had dashed to the Wanderers Club after playing a high-goal game at International Polo Club, blazed past nearly everyone else on the field to score the last goal of round two.

The fifth chukker opened with an Invicta goal by Tony Calle, who moved to Wellington from Quito, Ecuador three years ago. In the sixth chukker Gobin passed the ball on two long shots to Arellano, who tied the game at 2. Gonzalez swooped past Brooke USA ambassador Benjamin Avendaño to score, ending round three 3-2 for Invicta over GJ Racing.

GJ Racing won the tournament with the highest cumulative score. The remaining places were determined by round robin rules, with Invicta second and Provident Jewelry third.

For GJ Racing sponsor Gil Johnston, a longtime sponsor of teams, youth tournaments and the Polo Training Foundation, this was her first time sponsoring a team in Brooke USA’s Sunset Polo™ & White Party event. “It’s for a good cause and a good organization, so why not?” she said, adding that she felt her team played exceptionally well.

Lisa Bair also sponsored a team (Invicta) in this event for the first time. “I couldn’t be more happy and proud,” she said. “I have attended this event for four years, and I’m impressed by Brooke USA’s work, both in its mission to help animals and in how it has raised awareness in Wellington about the plight of these animals.”

Returning sponsor Geoff Fear said Provident Jewelry came back ready to defend the title they won last year. “We wanted to win again, but the important thing is that it was a good competitive game, and everyone had fun,” he said.

Game organizer Gates Gridley said he strived to put the three balanced 8-goal teams together. “There was a lot of young up-and-coming talent on the field today,” he said, adding that the players consider it a privilege to play in Brooke USA’s Sunset Polo™ tournament because they support the organization’s cause.

Emily Dulin, executive director of Brooke USA, said she was grateful to the participating players for “giving their time to this cause to help the working equine world because like us, they truly understand the bond between people and animals.”

Longtime Coca-Cola player Julio Arellano (father of MVP Hope Arellano) selected the best-playing pony. “The last chukker is what decided it for me,” he said. “Marwan [Mohey-El-Dien] came out on a gray mare that played her heart out for him. She got him to a lot more plays than he was in before, and he did great.”

For more information or to donate, please visit www.brookeusa.org.