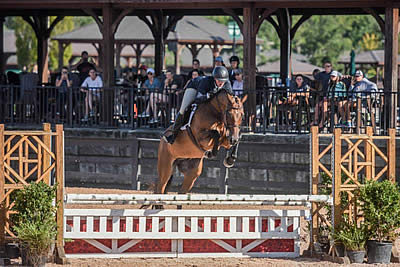 Fifteen pairs challenged the first-round course set by J. P. Godard (Aiken, SC), and it was Januar all the way after his initial score of 87. Beardsley O’Grady called the 2006 Dutch Warmblood gelding (Junior Mariner x Poetri) “perfect” and “playful” on the way to victory.

“It went really well, so I couldn’t be happier,” said Beardsley O’Grady. “The course was nice. He’s a blast to ride, and he’s got a ton of experience, and I’m lucky to get to ride him. He’s a showman; he goes in there and shows off! So, that works in our favor.

Beardsley O’Grady emphasized that Januar is happiest in limited competition with National Derbies only, but he makes the most of every trip around the ring: “His story is a little long – he was imported a couple years ago, and has had a long recovery from a couple injuries,” she explained. “We’re lucky enough that he is back and fully recovered to be in the show ring. He has always loved showing, so I think that’s honestly also helped his recovery. He’s done really well here [at TIEC]. We do a limited amount of shows, and he just loves it every time.

“Jeanne [Smith], our trainer, and his owner, Ginny, have both obviously played a huge part in him,” Beardsley O’Grady continued. “He’s just perfect, and we love him. He’s awesome. Going forward, he will remain a National Derby horse. We want to protect him and keep him happy and sound. He’s not old, but with his prior injuries we want to keep him protected. Ginny just loves her horse, and Jeanne is such a good horseperson that she’s never going to push him,” she concluded. “They’re a really good team for him!”