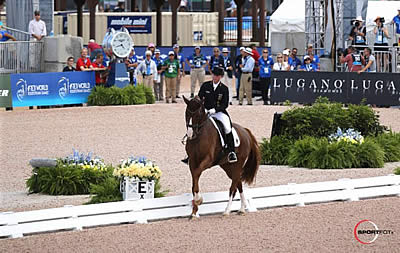 Tryon, NC USA – September 13, 2018 – It was anything less than routine when Germany took the Team Gold medal, adding number 12 to their collection in Helgstrand Dressage competition at the FEI World Equestrian Games™ Tryon 2018 on Thursday, September 13 in U.S. Trust Arena. Team veteran Isabell Werth’s tears ran freely after her stellar performance with Bella Rose, which brought the team score up to 242.950 points to secure their stance at the top of the podium.

Sönke Rothenberger (23) and Cosmo, both at their first WEG, had added 81.444 to the scores of Jessica von Bredow-Werndl and Dorothee Schneider. Those two had set the foundation for the Gold medal on Wednesday during the FEI Grand Prix competition.

Team USA finished second on 233.136 points, securing their second WEG Team Silver thanks to a top performance from Laura Graves and Verdades. The pair rode in last and turned in 81.630 points, the second best result of the competition.

“I was a bit under the weather today, but it is amazing what adrenaline can do. There was a lot of pressure on me today,” Graves said.

“For the last six or seven years I think that people thought that British Dressage was just Valegro and that was it.

“I think this has proven that we do still have depth in British Dressage, which was the main point of coming here,” Carl Hester said.

Dressage queen Isabell Werth, at her seventh WEG, changed between crying and beaming even long after the last halt in front of the judges had earned her the top score of 84.829.

“This was my answer to all those who did not understand how I could leave the world’s number one horse at home for this one. Most horse people here know how close I am to Bella and to bring her back after the long recovery after WEG 2014 is extra special. We always knew it could be a risk, but it is like that with every horse.”

Krajewski, a renowned superstar performer in the dressage phase with Chipmunk FRH, did not disappoint the electric atmosphere in Tryon Stadium that lapped up every moment of what at times looked like an exhibition performance.

The rider herself admitted she was close to tears, such was the horse’s brilliance in scoring just 19.9 penalties, as defending champions Germany made an immediate statement of intent in their quest to capture the Mars, Inc. Eventing crown.

There were some strong dressage displays on day one of the competition, with the likes of USA’s Boyd Martin, Great Britain’s Piggy French, Australian Christopher Burton and France’s Donatien Schuly all posting sub-30 scores.

But, the German was in a different league, and she said, “Maybe something really good was going to happen today and he felt awesome during the test.

“He has done good dressage tests before, but to produce it in such an atmosphere on this day, the people went crazy.

“It is not a personal best – he has had scores of 19 something before – but it is not just push a button and get 19. With a horse like him that can really do it, it is all about the detail.

“I am so proud. I had to stop the tears when I finished the test. It is an amazing feeling.”

Boyd Martin rose to the challenge impressively on home soil with Tsetserleg to post a 27.1 score and lie second overnight, just ahead of Piggy French and Quarrycrest Echo on 27.8.

“I am very happy with him,” he said of the 11-year-old gelding. “It is only the second time he has done that test. He’s a good boy and just gets in there and does it.”

French led the British challenge on day one as they bid to reclaim a title won impressively in Kentucky eight years ago.

“He is a really cool horse,” French said. “He’s still not the most experienced and there is still more to come from him, but he has got an amazing brain and so you can be quite brave. I always give it a good go.”

“I was thrilled to bits with him, to be honest,” Tait said. “My team mates told me to be brave, but when you are going out first for the team you want to post a solid score, and he did that.”

And Hoy added, “He (Vassily de Lassos) could not have done one step better. He is not the finished product, he is a long way from it, but his test was a personal best. I jokingly said on Wednesday night that I was going to ride for a sub-30 score!”

Thursday’s second Individual Qualifier saw six remaining places to be filled, joining the other athletes who had progressed from the first qualifier.

It was Austria’s Martin Muhlstatter, riding Blo Gun, that took the top spot with a score of 223 points and was followed by Italy’s Pierluigi Chioldo and Gun at the Gate, with French challenger Axel Pesek also progressing on Uncle Sparky.

“She’s an amazing mare,” said Pierluigi, of his horse. “She was in the pasture, but she started being ridden again for WEG. She’s ten and she’s great.”