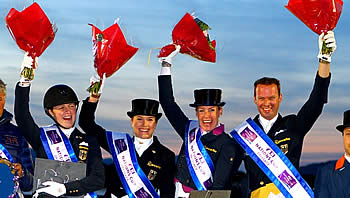 Vidauban (FRA), 7 March 2015 – Consistently strong performances from all four team members secured a convincing victory for Germany at the opening leg of the FEI Nations Cup™ Dressage 2015 pilot series at CDIO 3* at Vidauban in France today.

Victoria Michalke, Thomas Wagner, Sanneke Rothenberger and Bernadette Brune threw down the gauntlet in yesterday’s Grand Prix, but their winning margin was a slim one, with only 1.6 points separating them from The Netherlands in runner-up spot, while the host nation lined up a close third when a less than a point further adrift.

Today, however, the Germans pulled well out in front in the Grand Prix Special, boosted by the individual winning score produced by Wagner and his 13-year-old gelding Amoricello. And it was a special day in every sense for Brune, as the 40-year-old athlete who created the charming Domaine Equestre des Grands Pins in the heart of Provence and who, as Honorary President of CDIO3* Vidauban is involved in every detail of the event, stood on the top step of the podium alongside her German colleagues.

A total of five nations lined out in this first round of the six-leg series, and The Netherlands, Italy and Russia fielded just three riders per team. Event organisers have a choice of competition formats again this season, and at Vidauban the results from both yesterday’s Grand Prix and today’s Grand Prix Special were taken into account.

It was a fairly evenly-matched contest on the first day, with Russia lining up fourth when totalling 200.740 and Italy in fifth with 199.420. But today the French rallied strongly to overtake the Dutch who have been unbeatable for the series title since the FEI Nations Cup™ Dressage pilot concept was first launched two years ago.

Bertrand Liegard produced the highest French score when posting 71.333 with Star Wars for third place individually in today’s Grand Prix Special, and when that was added to the 69.393 picked up by Alexandre Ayache and Lights of Londonderry and the 68.451 earned by Stephanie Drieussel and Amorak, then Sarah Casanova’s 66.078 was the French discard for a total of 209.177 and an overall score of 413.977.

The Netherlands’ Dominique Filion was highly competitive once again today when earning 72.235 from Ground Jury members Raphael Saleh (FRA), Hans-Christian Matthiesen (DEN), Elisabeth McMullen (CAN), Peter Holler (GER) and Francis Verbeek von Rooy (NED) to fill individual second place. But 67.608 from Maas and 67.137 from van Lieren saw the Dutch add only 206.980 to their first-day finishing total, and that dropped them below the French by just 1.27 points on a final tally of 412.700. Italy’s Micol Rustignoli (Fixdesign Corallo Nero), Ester Soldi (Harmonia) and Leonardo Tiozzo (Randon) slotted into fourth on a final score of 397.616, while fifth spot went to Russia’s Larisa Bushina (Ju Ju), Tatiana Dorofeeva (Kartsevo Upperville) and Tatiana Miloserdova (Awakening) on a combined total of 397.466.

Delighted with the result

Brune had every reason to be delighted with the result. “I thought we could win, but to be honest I am in shock at the moment!” she said after the prize-giving ceremony. “Our horses all went really well today; they were calm and concentrated and just got on with their job, but yesterday it wasn’t so easy. For many of the horses it was the first time to go outdoors for a long while, and they were a little tense in the Grand Prix, but today it was much better.”

About her Oldenburg stallion, Spirit of the Age, she explained, “I only started riding him in Grand Prix 18 months ago and he has been very successful, moving up from 3* to 5* very quickly. And three years ago he didn’t do dressage at all, so he’s really progressed and he’s still only 11 years old!”

She had plenty of reason to be proud today, as both show organiser and competitor. “I like it when I organise an event and it goes well; I like to put something back into the sport. For me it’s a bit different. I’m only doing dressage for few years now; before that I was a jumping rider,” she explained.

Thomas Wagner’s Hanoverian gelding improved impressively to take top marks today and help Germany to victory. “Yesterday I had little mistakes but today my horse was much better and this was a personal best with Amoricello. He’s 13 years old and I have been training him for 10 years so we know each other very well. Two years ago I won the German Professional Riders Cup with him but, at international level, this is my biggest achievement,” he said.

Victoria Michalke, who is based near Munich, really enjoyed the whole Nations Cup experience. “Competing as part of a team was great fun! The nice part is that you watch the other riders and they watch you and they support you – you want them to have a good test and they want the same for you – it’s a lovely feeling!” she said.

She also has a long history with her Oldenburg gelding, Dance On. “I have him since he was two years old and he’s 13 now. We have improved and grown together,” said the talented young German rider. “Last year I was on the Under-25 Nations Cup Team at Aachen, but this is my first team competition as a Senior and I’d love to get on another opportunity to ride in a Nations Cup because my aim is to one day be on a team for the European Championship. I have learned a lot from this – it’s been a wonderful experience!”

The next leg of the series takes place in Wellington, Florida from 24-28 March 2015. For details of the US fixture, visit website www.globaldressagefestival.com, Email DressageFestival@aol.com or Tel +1 561-793-5897.

In the six-leg FEI Nations Cup™ Dressage series, event organisers have a choice of competition formats, and the organisers at Vidauban chose the option of counting results from both the Grand Prix (6 March) and the Grand Prix Special (7 March).

The team classification was determined by the best three scores per team in each competition.

The next leg of the series will take place at CDIO3* Wellington (USA) 24-28 March.