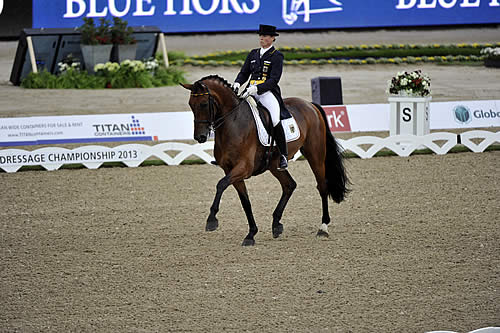 Herning (DEN), 21 August 2013 – Two great tests from multi-medalled veteran, 44-year-old Isabell Werth, and team rookie, 23-year-old Fabienne Lutkemeier, have given Germany the advantage after the first part of the Blue Hors FEI European Team Dressage Championship in Herning, Denmark today.  Going late into the evening, Werth stamped her authority on the leaderboard when posting the highest first-day score of 75.213 with a great performance from Don Johnson.  Lutkemeier’s 73.237 with D’Agostino had previously been the one to beat, so the country that has claimed the European team title on 21 previous occasions is well-positioned as the second tranche of riders take their turn tomorrow (Thursday) morning.

Denmark’s Andreas Helgstrand and Akeem Foldager earned individual third place with a score of 72.720 which, along with the 68.875 registered by team-mate Lone Bang Larsen and Fitou L leaves the host nation in silver medal spot, but with only a fractional advantage of 0.014 percent over The Netherlands, while Sweden and Great Britain fill the next two spots on the leaderboard.

The day didn’t start well for the defending champions from Great Britain when, second into the arena, Gareth Hughes’ 15-year-old mare DV Stenkjers Nadonna produced a nightmare ride that began with her going into reverse at the first halt.  The pair who got a late call-up when Laura Tomlinson had to withdraw her London 2012 Olympic gold medal winning ride Mistral Hojris, were awarded the lowest score of the day, 60.866, and that really piled the pressure on second-line British team member Michael Eilberg.  Hughes said afterwards, “It was the worst test I did for several years.  She is a beautiful mare who tries her hardest, but today the tension got to her.”

Eilberg really rose to the challenge of keeping British hopes alive however with a lovely test from his handsome grey mare Half Moon Delphi, known at home as Maggie, who put things right back on track with a score of 72.264 to leave them in fourth place to date. Son of well-known dressage trainer Ferdi Eilberg, the 26-year-old only turned his attention to the sport four years ago having previously been a jumping competitor.  And he has quickly demonstrated his innate skills by producing one of the most desirable rising stars of the past few seasons – Woodlander Farouche which claimed the talent-spotting 5-year-old and 6-year-old FEI World Breeding Dressage Championship honours at Verden in Germany in 2011 and 2012.

“I arrived hoping to match my personal best of 73 percent (at Hartpury CDI3* in July) which I suppose is a big ask at your first Championship so I’m happy with my score,” Eilberg said this evening.  Talking about the pressure to perform to his best following his team-mate’s difficulties, he explained, “I went in not knowing how hard to push after Gareth’s test with the risk that my mare could boil over too.  I had to think of the team as it was a big atmosphere in there so rode conservatively to start and as our confidence grew, she began to enjoy it – we both did.  Afterwards, dad didn’t talk to me in German so I knew instantly it wasn’t too bad!  I’m chuffed to bits with how she coped; I really love that mare and I can be braver with her next time.  Now Carl and Charlotte have got to fly!” he added.

The question now is whether London 2012 double-gold medallists Charlotte Dujardin and Valegro and her trainer and mentor Carl Hester and Uthopia who were also on that historic golden team in Greenwich Park 12 months ago can build on Eilberg’s effort in an attempt to repeat the British team triumph enjoyed at the last FEI European Dressage Championships in Rotterdam, The Netherlands, two years ago and, of course, Olympic glory.

There is much more action to take place tomorrow however, and although Germany is in the driving seat there are so many sparkling partnerships yet to take their turn including defending individual double-champions Adelinde Cornelissen and Jerich Parzival and Edward Gal and Glock’s Undercover from The Netherlands that it still looks wide open.  Werth and Lutkemeier will be hoping that Kristina Sprehe (Desperados FRH) and reigning Reem Acra FEI World Cup Dressage champions Helen Langehanenberg and Damon Hill can build on their achievements today.

Werth was most impressed with Lutkemeier’s performance.  “She had a super ride,” Werth said. “The German team had already decided that attack was our best policy and Fabienne did a wonderful job today,” she pointed out.

She was delighted with her own result too.  “I’m very happy.  I started conservatively with the first piaffe because he (Don Johnson) was not enough in front of the aids, but I could ride the test more today and he was really listening to me and responded quickly. I was extremely satisfied with the complete canter tour and I had a super feeling in the last extended trot.  I was also very pleased with the last piaffe and the light-footed passage to the halt,” she explained.

Ireland’s Roland Tong and Pompidou get the action underway tomorrow morning and with Sweden’s Patrik Kittel and Toy Story, Britain’s Hester and Uthopia and Gal with Glock’s Undercover all taking their turn within the first 30 minutes of action it’s going to be a thriller from the start. However the lead is likely to be altered many times before the 2013 Blue Hors FEI European Dressage Team champions are crowned in the early afternoon.

Norway fields a team of three while the remaining nations have sent four-member team.

The best three scores of each team count towards the final result.

Total of 65 horse-and-rider combinations from 19 countries.

The inaugural FEI European Dressage Championship was staged at Bernstorff Castle in the Danish capital city of Copenhagen in 1963 when 16 riders from 8 nations participated and Switzerland’s Henri Chammartin took the Individual title riding Wolfdietrich.  There was no team competition.

Today’s Grand Prix was the first part of the Team competition which continues tomorrow at 08.00.

After the first two riders from each team competed today, Germany holds the lead with Isabell Werth and Don Johnson at the top of the individual standings on a score of 75.213 and Fabienne Lutkemeier in second position with D’Agostino on a mark of 72.237.

26-year-old Danielle Heijkoop, NED who steered Kingsley Siro into seventh place with a mark of 70.228: “Anky (van Grunsven, her trainer) was very pleased.  The only mistakes were in the zig-zag and that she did 17 tempis instead of 15.”

Fabienne Lutkemeier, GER – “I was very happy with my ride and my horse despite a small mistake.  The arena is very acoustic, but really nice to ride in.”

Hans Peter Minderhoud, NED who slotted into fifth place with Glock’s Romanov: “I am satisfied although my ride was not flawless.  He changed the canter just before a pirouette, but, well it can happen.”

Denmark’s Andreas Helgstrand: “I am a bit disappointed because my training up to the Europeans had been going so well, and then today we made so many mistakes, but horses are living animals, so you never know.  My warm-up today did not really go according to plan, and Akeem was just more tense than I expected.”

For further information on the ECCO FEI European Championships 2013, go to website: http://european-herning.dk/GB.aspx.