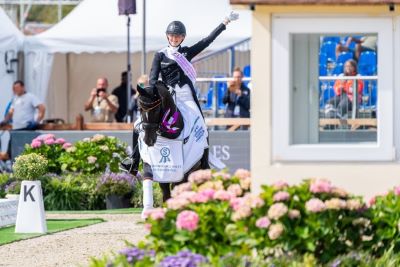 German U25 riders matched their Senior counterparts when claiming all the gold medals in the FEI Dressage European Championship U25 at Hagen (GER) where a new Dutch star was born.

Germany’s Rothenberger and Netz and The Netherlands’ Poelman posted the three highest scores in the team competition and continued to be locked in battle for the individual and Freestyle titles over the last two days.

In Saturday’s Grand Prix which decided the Individual medals, Netz squeezed Rothenberger off the top step of the podium by just 0.052%. This a young man with a remarkable story. His family had no connection with horses, but he was born with a passion to ride.

“When I was four, I was allowed to get on a horse for lunging lessons; they lunged me for over one year and then my father said if he’s tough enough to do it for a year without reins, then he really wants to do it! So we rented horses a lot and when I was nine they bought me my first pony. They had no idea what they were doing and neither did I, so they bought a three-year-old Haflinger! We grew together, we learned together, and then when he was seven and I was 13, we did our first Small Tour together and got our first Prix St George placement,” Netz explained.

He was talent-spotted by Germany’s Jessica von Bredow-Werndl when he was just 17. “She sent me an email asking if I wanted to ride for her – I thought it was a fake! But we ended up having a call and I took the train to Bavaria and stayed there for four days. And I just fitted in perfectly. So I finished school, packed my things, and moved,” said the young rider who has been working for the German star for the last five years.

Partnered with Elastico, who is owned by Japanese rider Akane Kuroki, Netz’ career is blossoming. He describes the stallion as “a cool dude! It’s a great feeling just to enter the arena on a beautiful horse like this. Growing together with him wasn’t that easy because he was used to different training, but we did our first competition one year ago and we finished third,” he explained. Kuroki saw the special relationship the young German was building with her horse and generously offered to let him ride it.  “I’m very thankful to her. She said go for it and we went for it and here we are!” Netz said.

Rothenberger had her day to shine when taking Freestyle gold. Netz’s end result was a score of 81.210 while Rothenberger’s mare Flannel posted 81.955 for a brilliant performance.

This 22-year-old rider, who hails from a family steeped in the Dressage world, already has a lifetime of Championship experience, winning multiple titles over the last decade at Pony, Junior, and Young Rider level and she is continuing in the same vein in U25.

“This has been such a perfect Championship; it’s super organised here and the Kasselmann family did an amazing job!” Rothenberger said.

She was thrilled with her mare. “I’ve always believed that Flanell has no limits and I still do. This horse is absolutely incredible. I’ve never had anything like her and it’s such a blessing to go in there with such a horse knowing that as long as I, the rider, don’t make a mistake, this horse can go for it. She’s shown it in this Championship; yesterday we had a rider mistake, but I’m incredibly happy with how she’s done at her first European Championship.

“I got her in May last year and due to Corona, we had a lot of time to get to know each other. But the show season didn’t quite get going, so this is only her fourth competition with me, and she just keeps getting better!” she added.

Bronze went to Poelman whose Freestyle ride was a pleasure to watch, filled with lightness and harmony.

“I never expected a medal – it’s a big surprise even to ride here!” said the 20-year-old who hails from close to Amsterdam. “I have this horse only since November last year and we only went to one international show together before. I rode international in Ponies and Juniors but never at a really high level; this is my very first Championship,” Poelman explained.

She says her sudden rise to stardom is all due to the lovely gelding Chocolate Cookie RDP, which was previously competed by Dutch counterpart Dana van Lierop. Poelman’s trainer Lotje Schoots put the pair together and it’s clearly the perfect partnership.

“He is really nice and very easy to ride, and I have a great connection with him. He is always very willing,” said the young rider who produced wonderful piaffe and passage from the 14-year-old gelding.

She only competed for fun until last year when she was invited to ride in an observation trial by Chef d’Equipe Monique Peutz. “We had winter training for riders and Jessica told me she had Chocolate Cookie and I said bring him along, and it looked so nice. First she was thinking she’d start slowly, but I said no, there’s an international competition in Exloo, so just give it a try, and she did and she did very well – now she has one silver and two bronze European U25 medals!” said the Dutch team manager.