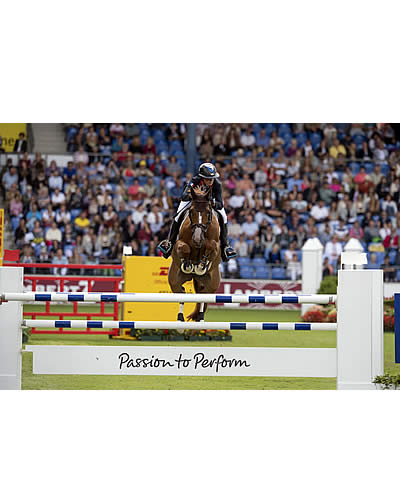 Aachen (GER), 19 August 2015 – The FEI European Jumping Championships 2015 got off to a flying start in Aachen, Germany today with a brilliant victory for Frenchwoman Penelope Leprevost, while the host nation foursome of Meredith Michaels-Beerbaum, Ludger Beerbaum, Christian Ahlmann and Daniel Deusser took the early lead in the team standings.

The French lie second going into tomorrow’s first round of the team competition with the defending European champions from Great Britain in third. But there is less than a fence between the top six countries, with Spain in fourth, the Netherlands in fifth and Ukraine in sixth place.

A total of 22 teams lined out in this afternoon’s speed competition, and with four seconds added for every fence down, and results converted into points, just 1.33 separates Germany from France, while the British are only another 1.29 points further adrift.

And there is another sub-plot at play this week, with the last three team spots on offer for the Rio 2016 Olympic Games. France, Germany, Netherlands, Sweden and Ukraine are already qualified, but the defending Olympic champions from Great Britain are not. As it stands this evening, they lead in the race for those three Rio berths followed by Spain, while the seventh-placed Italians and eighth-placed Irish are also in hot pursuit.

Had to be sharp

Course designer, Frank Rothenberger, set them a straightforward 13-obstacle track, but they had to be sharp from start to finish, with two big oxers opening them up from the outset. The double of triple-bar to oxer at fence five and the following narrow red gate at six claimed a number of victims. But it was the next double, a vertical with water-tray to oxer on a one-stride distance, that hit the floor most often, while the following planks also took their toll. The track got progressively more difficult, and the left-bend turn to the vertical at fence 10 had to be managed carefully. The biggest drama of the day was a freak fall for Zuzana Zelinkova here. the rider from the Czech Republic ejected from the saddle when her fabulous bay stallion, Caleri, put in a typically enthusiastic leap.

It was Germany’s Meredith Michaels-Beerbaum who opened the competition with an exhibition round from her lovely grey gelding Fibonacci. She set the pace in 71.85 seconds, and that gave the rest of the home team a great platform on which to build. Christian Ahlmann followed with a foot-perfect run with Taloubet Z in 70.80 seconds and when Ludger Beerbaum raced through the finish in 69.17 seconds he ensured not only a top team placing for his side, but individual runner-up spot in the competition. Fourth-line German, Daniel Deusser, had a single fence down with Cornet d’Amour.

The British, meanwhile, were also impressive. The big Aachen arena looks tailor-made for Michael Whitaker’s extravagant grey stallion Cassionato, and when their careful clear was followed by a much quicker one from Ben Maher and Diva, then Jessica Mendoza’s eight-fault effort with Spirit T could be dropped because Joe Clee produced the perfect end to their day. The 37-year-old galloped fearlessly around the track with Utamaro D’Ecaussines to break the beam in 69.67 seconds which slotted the pair into third place individually.

Defending individual European champion, Roger Yves Bost, was not selected for his side, but thanks to great back-up from Simon Delestre and Jerome Hurel, Leprevost looks poised to do big things for France this week.

She was delighted, and a little surprised, that she came out on top this afternoon. Her 10-year-old chestnut mare, Flora de Mariposa, began the year really well but picked up an injury in her left foreleg just before their home show at La Baule at the end of May. She was out for two months and only returned to action in July, competing in Germany and then travelling to Hickstead (GBR) where she showed she was right back to her best again when jumping double-clear in the Furusiyya FEI Nations Cup™ before finishing second in the Grand Prix. Those results sealed the pair’s place in the French side.

“Flora came back so quickly once she returned to work, and she’s full of confidence and very fresh!” said the 35-year-old rider who finished second with Vagabond de la Pomme at the Longines FEI World Cup™ Jumping Final in Las Vegas, USA three months ago. She didn’t think the Aachen arena would suit Vagabond, so Flora’s return to top action is very timely.

About her winning ride today, Leprevost said, “I had a good run, and my mare went very well. I was too long at the triple bar in the combination, but she jumped amazing and I didn’t think I was so fast!”

Runner-up, Beerbaum, said, “Today’s course suited naturally fast horses like Penelope’s and mine. Knowing that this was just one-third of the team competition and there are two big rounds left, nobody went completely flat out today. I’m happy with my performance and with my team; we did four really good rounds,” he pointed out.

Joe Clee was more than pleased with his third-place individual finish for Britain, especially since the rest of his team was relying on his result. “Obviously when I went in the arena I was feeling the pressure. I knew I had to ride a good round, but he’s (Utamaro D’Ecaussines) great under pressure; the more pressure I put on him the better he jumps, and after fence four I felt myself relaxing and confident, and I knew I could take a few more risks. He answered all the questions I asked him today,” he said.

The Belgians didn’t enjoy the best of days and are lying tenth at this early stage but individual rider, Gregory Wathelet lies individually fourth ahead of Ireland’s Bertram Allen in fifth and Spain’s Sergio Alvarez Moya in sixth on the individual leaderboard.

Teams go in reverse order of merit in tomorrow’s first round of the team competition which starts at 13.45 local time.

A total of 94 horse-and-rider combinations were on the start-list for today’s opening Team and First Individual Qualifier at the FEI European Jumping Championships 2015 in Aachen, Germany.

First into the arena this afternoon was Germany’s Meredith Michaels-Beerbaum with the fabulous Fibonacci.

Table C 239/263 competition judged according to time with conversion of penalties into seconds added.

Amongst the individual competitors today were father and daughter, Geir and Victoria Gulliksen, from Norway.

Germany heads the team rankings going into tomorrow’s first round of the team competition.

Ludger Beerbaum GER: “Meredith started close to perfect today – a really accurate, nice round and the other three team-members as well. I think we can be really pleased with today’s performance.”

Joe Clee GBR: “The footing was fantastic today; I didn’t feel uncomfortable on any of the turns.”

Frank Kemperman GER, course designer: “It’s always difficult (building the course) for the first class. It is scheduled up to 1.50m and can’t go any bigger. The highest jump today was 1.53m and we had about one-third clear rounds – 25 percent is what you want but I’m pleased with how it went. When I was building the course I tried to avoid tiny turns and short turns because we have so many horses in the arena.”

Bertram Allen IRL: “My mare will probably take a good bit of work tomorrow morning – she’s fresher than normal so I suppose that’s maybe not a bad thing when you’re looking into a long week – I’ve plenty of horse left!”