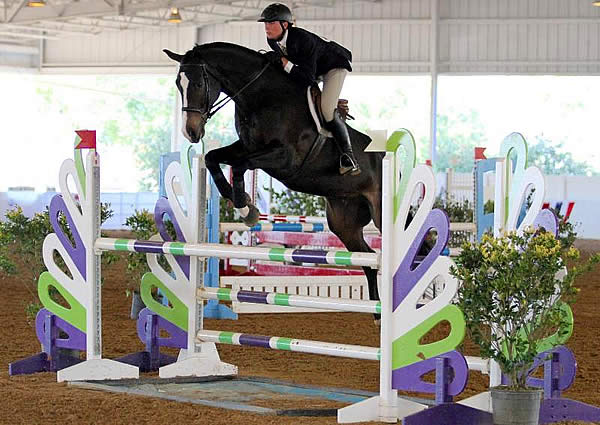 Geoffrey Hesslink rode Bumacoemba to blue ribbons in both the hunter and jumper phases of the WIHS Equitation class. Photo By: Emily Riden/PMG.

Tampa, FL – March 30, 2013 – Geoffrey Hesslink kept his heels down and his scores high, earning him the top call in today’s WIHS Equitation class at the Tampa Bay Classic.

The hunter phase tested riders over an eight fence Keith Bollotte designed course that included an in-and-out and a number of long approach oxers. Hesslink and Bumacoemba, owned by Lynnewood Stables, Inc., earned an impressive top score of 82 to win the class and put them in the top spot going in to the evening’s jumper portion of the competition.

Finishing close behind Hesslink in the hunter phase was Lizzie Van Der Walde riding App For That, owned by Dasilva Investments. Van Der Walde delivered an equally fluent ride, to earn a score of 81 and the second place ribbon. Rounding out the top three was Ashton Alexander aboard Meghan Flanagan’s Terrapin Station, finishing with a score of 80.

The field of talented equitation riders faced off again in the jumper phase, but no one was able to overturn Hesslink and Van Der Walde’s standings. Van Der Walde was the first to compete over Michel Vaillancourt’s course in the Covered Arena where she laid down the opening trip in a time of 67.59 seconds, slightly over the time allowed of 67 seconds. Van Der Walde’s equitation and riding ability throughout the course compensated for her faults and earned her a competitive score of 79. Combined with her earlier hunter score, Van Der Walde set the score to beat at 160.

Jessica Castillo was the third to return for the jumper phase aboard her own mount, Winston De Kalvarie. She delivered the fastest round of the night at 60.58 seconds and came close Van Der Walde’s jumper score, clocking in with a score of 78. Combined with a hunter phase score of 72, Castillo would finish with a score of 150, earning the third place award in the jumper phase and the sixth place award over all.

Hesslink followed Castillo in the order of go and turned in scores that would go unmatched the remainder of the evening. Hesslink slipped through the timers in 64.46 seconds while maintaining strong form to earn the high score of 85. Coupled with his previous hunter score of 82, Hesslink’s 167 total was unattainable for any of those who followed him.

“On a day to day basis, you can usually trust him to get the job done,” Hesslink’s trainer Don Stewart explained. “He is very enthusiastic about his performance, so you don’t have to worry about him not doing enough work to get to the ring.”

Stewart continued, “We knew the course, and we knew the horse, and we figured that would go fine. He made mistake at the liverpool and tried to get in there too early and did eight. That was the only thing that was wrong with the round-the rest was textbook. I am very proud of him.”

In the Small Junior Hunters, Ashton Alexander delivered the perfect sweep, winning both the first course and the handy class aboard O’Ryan. Alexander started showing O’Ryan for fellow junior and owner Meghan Flanagan back in January and has enjoyed riding him whenever presented the opportunity.

“He’s unreal. His jump is just amazing, and no matter where you want to leave from he just does it and takes care of it. It’s so easy for him – that’s what I love,” Alexander exclaimed. “The first round was just so nice and smooth, and he’s so big strided that the lines are just right there. I liked the handy a lot too. The two last jumps were long rides to the oxers. I always like doing those on him because he makes such a beautiful jump out of them.”

Following the junior hunters, the Amateur-Owner 18-35 Hunters concluded the remaining three classes in their division, after which Callie Smith and Peron were named division champions.

“He was just a really good boy. He was champion my last week in Ocala too, so we’re kind of on a roll. He’s just been really good, and I’m so happy with him,” Smith shared.

The junior hunters will return to the Main Hunter Ring tomorrow morning for the final day of the Tampa Bay Classic. Following tomorrow’s competition, the Tampa Equestrian Series will return on Tuesday, April 2nd with the Tournament of Championships and more ‘AA’ hunter competition.