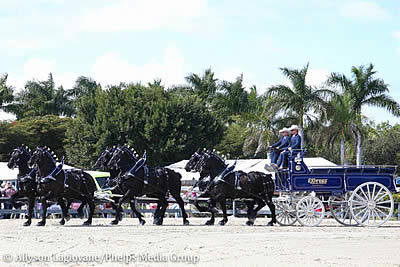 Wellington, Fla. – Feb. 9, 2019 – Day two of the Chesapeake International Draft Horse Show at Crab Orchard Equestrian Estate started off with a big bang with the Six-Horse Hitch Classic Saturday. The day’s events included entertainment from the Young Singers of the Palm Beaches, as well as the Four-Horse Hitch and the Ladies’ Team Cart class. A large crowd gathered at the Crab Orchard Equestrian Estate, generously donated by Frank and Monica McCourt, for the beautiful day in Wellington, Florida to cheer on their favorite teams from Friday.

For each class, spectators watched in amazement as the gentle giants entered the arena. The judges lined up in the middle of the ring to watch the team tests which consisted of teams completing three laps around the ring at the trot before changing direction across the diagonal. Trotting across the diagonal gives the drivers a chance to showcase their team’s skills to the judging panel. All hitches were then asked to demonstrate the natural gait, the walk, and the trot in the opposite direction to show the horses ability to work in unison under control. After being asked to line up in the center of the ring, the judges took a final look at the hitches’ presentations, while also asking for a demonstration the reverse gait. The final team scores were based on their ability to work together, head carriage, consistency, and the overall presentation of the hitch and driver.

The Six-Horse Hitch Classic class was comprised of 13 teams that included all the draft breeds-Clydesdale, Percheron, and Belgian. The teams were split into four heats to allow them room in the ring to really show off their skills to the judge. The top five teams were then called back to allow the judge to make his final decision. In the end, it was the Express Ranches team from Yukon, Oklahoma, driven by Josh, who took the top honors. Coming in second was Blue Ribbon Farm from Farmington, Missouri, driven by Dean. Third place in the very competitive class went to the Zubrod Percherons from Guthrie, Oklahoma, driven by Chad.

After the entertainment it was time for the Ladies’ Team Cart, where women of all ages drove their wagons with two horses pulling them forward. All of the ladies had beautifully turned out teams and wagons and were dressed to match the part. In first place was Sugar Ridge RV from Danville, Vermont, driven by Mary Fernhoff. In second place was Blue Ribbon Farm from Farmington, Missouri, driven by Alli Woodbury. Finishing in third place was Express Ranches from Yukon, Oklahoma, driven by Jeanine Regier.

The day was capped off with the Four-Horse Hitch class, with six hitches coming back without their swing team. This was another large and highly competitive class, with the crowd cheering excitedly as the horses thundered by them. The judge awarded first place to Zubrod Percherons from Guthrie, Oklahoma, driven by Chad. Second place went to Blue Ribbon Farm from Farmington, Missouri, driven by Dean. Rounding out the top three was Express Ranches from Yukon, Oklahoma, driven by Josh.