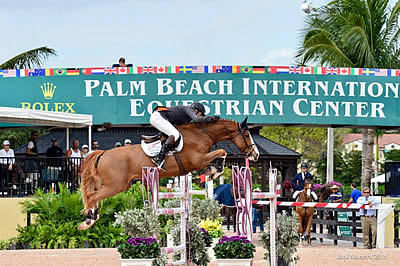 Wellington, FL – December 8, 2015 – Wilhelm Genn of Lebanon, OH piloted Bugatti, owned by Eduardo Leon, to a win in the $25,000 Noble Outfitters ESP Year End Grand Prix at Palm Beach International Equestrian Center (PBIEC) on Sunday, December 6, concluding the ESP Year End Awards Show. Genn and Bugatti finished the jump-off in 41.327 seconds, while Amanda Derbyshire of Wellington, FL and Lady Maria BH crossed through the timers in 42.33 seconds for a second place finish, and Emanuel Andrade of Wellington, FL and Armani Z collected four faults in the jump-off round to finish in third with a time of 42.424 seconds.

Bugatti, a 2006 Dutch Warmblood gelding (Heartbreaker x Nona Bella), came into the ring a bit fresh in the first round, according to Genn, but rode beautifully as the lead-off combination in the three-horse jump-off. Both track, set by Catsy Cruz of Mexico, tested agility and athleticism, with several sharp rollback turns included in both rounds.

“When I walked the course before the class, I thought I was a very nice course and in the lines you needed to be cautious in how you approached them. The lines rode beautifully though and the height was great,” noted Genn. “There were three in the jump-off which was exactly what you wanted for a class this size. I was hoping that he would go very smoothly today and he was a bit fresh in the first round, but he was just super in the jump-off.”

Genn led the charge in the jump-off round, tackling the track first, before two notoriously quick riders were to follow, which proved to be an influential factor in his plan, stating, “When you go into the jump-off round first, you don’t want to self-destruct. I tried to put the pressure on the others and I know that Amanda and Emanuel are both very fast riders and have very nice horses. I knew that I wouldn’t get away with just going a little bit faster so I had to put myself into a situation where they needed to feel like they had to do something to catch the time.”

Originally imported to the United States as a top hunter prospect, Bugatti seemed more suited for the jumper ring and has flourished under Genn’s guidance.

“I’ve had him since he was five and I’ve brought him slowly along. As he’s gotten older he’s started to wake up a bit more and has that nice mixture because now he understands when he needs to turn it on. He’s only nine and I don’t want to push for the 1.60m classes with him yet. Right now he has fun and he’s doing great,” explained Genn. “He did the 1.50m class last week and jumped clear finishing fifth so I know he will jump there eventually but I want to give him a little bit more time to grow up and get there himself.”

“He’s starting to figure out the difference between the first round and the jump-off, which is so important. I think that is typically a sign that they’re starting to get good at understanding what you’re asking them to do,” continued Genn.

Both of Genn’s top horses have improved and gained confidence through the 2015 season, which will set them up nicely for a competitive start to the approaching 2016. Genn explained, “I would like to keep winning, because you know winning is fun, but the two best horses we have right now, Bugatti and Welcome Cor, during the second half of next year I would like to begin bumping them up to World Cup qualifying classes and the bigger 1.60m opportunities. I think they’ll both be ready by then and we can have some fun.”

Abigail McArdle of St. Charles, IL and Harriri V.D. Maltahoeve, owned by Plain Bay Sales, took a commanding win in the $10,000 #1 Education Place Open Stakes Class at PBIEC on Saturday, December 5, finishing the jump-off round with a time of 37.873 seconds. Sharn Wordley piloted two mounts to the top three as Hickstead’s Axel, owned by Ashland Stables, finished in second with a jump-off time of 38.013 seconds and Charline 28, owned by Sky Group, collected third place, adding four faults to their time of 37.145 seconds.

McArdle carefully guided Harriri V.D. Maltahoeve to victory after both the jump-off and first round track proved to be challenging for many of the afternoon’s entries as a steady rain fell during the class.

“I came into the class knowing that she was going to be much more careful because of the rain, but if you know that beforehand, you don’t need to prepare any differently,” commented McArdle. “This is a super young horse that we have as well as a few other young horses down here right now and I think that this is a really nice way to start the season and prepare with these pre-circuit shows.”

McArdle has steadily risen through the ranks, as the talented young rider has collected several major victories this year and has her sights set on continuing with that consistency moving into next season. She explained, “I’d like to get my grand prix horse up in the rankings a bit more this season and look to improve there. We have a lot of nice sales horses coming down this season and I think it will be great to get them experience as well.”

Competition will continue at PBIEC beginning Friday, December 11, with the beginning of the Holiday Festival I. For more information and for a full list of results, please visit www.pbiec.com.