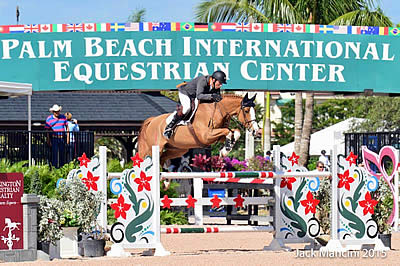 Wellington, FL – December 18, 2015 – Wilhelm Genn and Bugatti secured another victory today at PBIEC, this time in the $25,000 Pony Up Horse Treats Holiday II Grand Prix hosted at Palm Beach International Equestrian Center (PBIEC). Genn, of Lebanon, OH, and Bugatti, who also won the $25,000 Noble Outfitters ESP Year End Grand Prix on December 6, finished atop the class with a time of 39.234 seconds in the jump-off round. Abigail McArdle, of St. Charles, IL, and Harriri V.D. Maltahoeve crossed the timers just behind in 40.344 seconds, while Ansgar Holtgers of Wellington, FL and Wisconsin III took home third place honors in 44.171 seconds. Competition at PBIEC continues with the ESP Holiday III Series, which will conclude on Sunday, December 20, with the $25,000 Brazilian Court Holiday III Grand Prix beginning at 2pm.

Genn and Bugatti have had a strong start to their winter season in Florida, collecting several top placings at PBIEC, showcasing their potential talent for the future. Bugatti, a 2006 Dutch Warmblood gelding (Heartbreaker x Nona Bella), continues to excel in the 1.50m classes and seemed unfazed around the course, designed by Guilherme Jorge (BRA).

“I know that I’ve said this before but I really want him to just be consistent and have fun in these types of classes. I want to keep him at this height for a little bit longer and then try to take that next step to the bigger classes in the coming future,” said Genn. “He’s getting smarter and I really felt that today. He completely separated the jump-off and first round, which is what I had mentioned I was starting to feel two weeks ago. He’s starting to understand that part and it is a huge step in his maturity. It makes me very excited.

“I’m thinking about putting him in some of the bigger classes maybe towards the end of January during the WEF circuit and then just seeing how he feels after that,” continued Genn.

Genn and Bugatti mastered both tracks of the class and made quick work of the jump-off round, which saw the speedy McArdle and Harriri V.D. Maltahoeve nearly catch their time as the last jump-off pair, but the duo would ultimately settle for second place. Bugatti, not known for his massive stride, was expertly piloted by Genn, who chose to take several risky turns on course to make up time.

“I think it was a very good course today. Guilherme [Jorge] he’s such a smart course designer. He always sets the distances a little bit short here and a little bit long there so you really have to ride,” he noted. “He had a couple of lines today where you had to decide if you wanted to do six strides or seven strides in the middle, but you also had to keep the time in mind. That’s why I decided to do the inside turn after the second jump, because Bugatti doesn’t have that range in his canter. It’s not easy for us to leave out a half-stride and I’d rather add for the seven in the last line. I knew that by doing that I needed to make up the time and had to do the inside turn too.”

As a mount who must always stay mentally sharp to perform at his best, Genn stated that keeping Bugatti interested in the work is key when preparing and practicing for the bigger classes. He explained, “We really try to keep him happy when we’re getting ready. He will do a lot of flat work and trail riding the week of the class because we’re here at the same place quite a bit during circuit and he gets bored and to be honest, a bit lazy. I always try to incorporate things that are going to keep him focused and motivated because that’s when we see him really perform to his potential.”

Tisbo and Rosiere Vesquerie raced to the finish in the jump-off round, crossing through the timers in 30.566 seconds. Alexander Zetterman of Wellington, FL, who competes internationally for the country of Sweden, earned second place aboard Zidane, owned by Springfield Showjumpers, with a time of 31.61 seconds, while Mark Bluman of Weston, FL, who competes for Colombia, collected third place aboard Copa Cabana, owned by Stransky’s Mission Farms, Inc.

Competition at PBIEC continues through Sunday, December 20, with the conclusion on the ESP Holiday III Series, which will highlight the $25,000 Brazilian Court Holiday III Grand Prix at 2pm. For a full list of results, please visit www.pbiec.com.