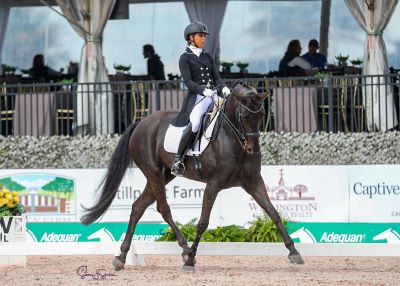 In the Prix St. Georges class, it was 27-year-old Genay Vaughn who staked her claim to a ticket for the final, scheduled for March 25. Riding her own and her mother Michele Vaughn’s Fleur Noir WSHS, an eight-year-old American-bred mare by Fürstenball, she posted 69.97% to head up the seven-strong class on an unseasonably rainy day.

Vaughn, who is based at Starr Vaughn Equestrian in California and has owned the mare since she was five, said: “I didn’t really know if we should compete or not, but the ring dried out throughout the day. We just did a nice short warm-up and went right in, and I think that was the best way to tackle it. When I first got her, she was really behind for her age, but I could tell right from the first ride that she was really trainable, really willing. And I love mares — I have a lot. When you get them on your side, they work so hard for you.”

In the big tour class — depleted of entries thanks to a morning of heavy rain — Nicole Levy (USA) rode her own Imposant MC to a 67.352% victory. The nine-year-old KWPN gelding by Bretton Woods was competing at only his second CDI show, having stepped in for the first time at AGDF 2021. Levy has also produced her horse since he was five and last year was sixth in the country in developing grand prix.

“We just started the national grands prix in the middle of January,” said the 39-year-old, “so he’s pretty new to this stuff, but he’s trying really hard. He has big gaits, so sometimes he gets tired with the compression required of the collection and can lose stamina, but that’s normal for a young horse.”

Jennifer Williams (USA) saved her best performance with Joppe K for the end of the week. The pair laid down a new personal best of 73.865% to top the Intermediate I Freestyle CDI2*. At just eight years old, The Joppe Partners’ gelding was the youngest in the class.

It had been four years since Eliane Cordia Van Reesema’s ride Codiak had set foot in a CDI ring, but the American rider made a triumphant return with Jewel Court Stud’s jumping-bred 13-year-old by Cristallo. Last to go in the Intermediate II CDI2*, they delivered a 70.265% to clinch the class. They edged out Portugal’s Tiago Ernesto and the Lusitano stallion Hobbit Interagro, whose 70.077% marked a new personal best. Barbara Bertschinger (SUI) finished third, riding Sonnenbergs Solisco CH to 67.441%.