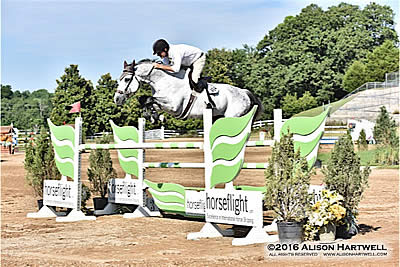 Allen Rheinheimer of Zionsville, Indiana, Technical Coordinator for the Classic Company show jumping events and the 2015 World Cup Finals, designed the course. “I built it to 1.40 m and tried to make it inviting so that the horses and riders would feel confident going into the Grand Prix on Saturday night,” commented Rheinheimer.

Rheinheimer set the first round time allowed at 85 seconds and had more than half of the class turn in clear first rounds, advancing to a second round opportunity. The second round was set at 43 seconds and only ten horse and rider teams posted double clear rounds.

Daniel Geitner and The Kenwood Syndicate’s Kenwood were the first to post double clear rounds in times of 77.422 seconds and 33.280 seconds, setting the new time to beat.

Luis Larrazabal of Wellington, Florida, in the irons of San Francisco Stables’ Quintus Fabius, rose to the occasion and beat Geitner and Kenwood’s second round time with their own 32.560 seconds, setting the new time to beat.

Aaron Vale of Williston, Florida and Sarah Turner’s Acolina R were the next horse and rider team to turn in double clear rounds, but their second round time of 34.170 would not be fast enough to take the lead and they would settle in eighth place overall.

Kyle Dewar of Ocala, Florida and his own Gomez Van De Withoeve followed Vale and Acolina R with back to back clear rounds and turned in a second round time of 34.109 seconds, which would find them finishing in seventh place overall.

Luis Muro’s Raino Du Jardin, ridden by Sabischy Hassler of Wellington, Florida, followed in the order with double clear rounds and posted a second round time of 34.205 seconds. The pair earned the ninth place ribbon.

Jordan Coyne of New Port Ritchey, Florida and her own Lazaro posted a clear second round in a time of 31.697, which temporarily took the lead and set the new second round time to beat.

Vale followed Coyne with Amatoville Enterprises’ Carlo and posted a second round time of 31.234 seconds, taking the lead from Coyne and moving her to the third place ribbon.

The heat was on to best Vale and Carlo’s time and Gustavo Prato of Wellington, Florida and Equus Forte, LLC’s Carna Z did just that! They turned in a clear second round in a time of 31.901 seconds, taking the lead and setting the new time to beat. Vale and Carlo would finish in second place overall.

Vale had one more ride to go on Thinks Like a Horse’s Bonzini S. Although they posted double clear rounds, their second round time of 34.452 seconds would find the pair finishing in tenth overall.

Geitner and Lionshare Farm’s Creativo sat in the enviable last to go spot. The pair turned in double clear rounds and a second round time of 30.150 seconds, winning the class!  Carna Z and Prato placed fourth and fifth place was awarded to Quintus Fabius and Larrazabal.  Geitner returned for the sixth place ribbon in the irons of Kenwood.