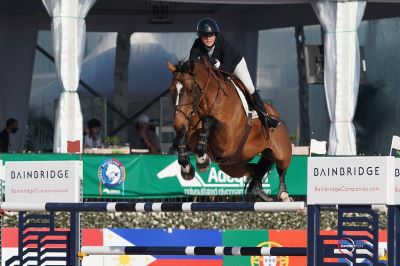 Wellington, Florida (March 31, 2021) – Chile’s Gabriela Reutter and Lumiere Horses’ Atticus Diamant dominated in two shining rounds that bested a field of top competitors in one of the most highly anticipated weeks of the 2021 Winter Equestrian Festival. Reutter and the 2009 Selle Français gelding (Diamant De Semilly x Vas Y Donc Longane) have been streamlining their partnership with exceptional results under the guidance of double Olympic Medalist Chris Kappler. The pair’s quick double clear efforts were belied by an obvious ease and grace over the courses and their subsequent jump-offs. Lumiere Horses, Reutter’s barn & brand, specializes in developing horses of all levels for international competition and recently imported three horses to the US this season, and one of the recent imports, Here I Am Z, jumped to 4 out of 5 blue ribbons in his first week of schooling shows in the US.

Wednesday began Reutter’s consecutive wins with a first round clear effort in the $6,000 1.45m Cabana Coast 2-star, one of only 15 to go to the jump-off out of a field of 49. Their winning time of 68.59 seconds was nearly 4 seconds faster than the second place effort. Atticus Diamant, a.k.a. Monty, has been in Reutter’s string for more than 3 years, and is the horse that first took her to the 2-star level. Thursday brought another win for Reutter in the $6,000 CabanaCoast 1.40m Jumpers CSI2*, besting a 10-horse-and-rider line-up to produce the fastest of five double-clear rounds. She and Monty cleared the jump-off timers in 26.75 seconds.

“We put in a lot of prep, especially for this Stadium arena at Global, and it was great to win twice,” said Reutter. “I like the stadium because it keeps big horses like him contained. He jumps rounder even though we’re going fast, so I wanted to make sure that he was in front of my leg. He had 2 weeks off and was very fresh, and was really jumping amazing. The other day he didn’t get to ride in his awards presentation; I had my other horse sub in, so I think he was a little jealous and wanted his chance too!”

She continued, “It’s awesome to win twice! I really wanted to win again. He’s my heart horse, and I feel super connected with him. It’s almost like we’re thinking the same thing at the same time, and we are good at compensating for one another. I really wanted this for both of us, mostly because he deserves it. We haven’t had two wins in one week like this, so it’s a great feeling.”

To date, Gaby has multiple top finishes in international FEI classes, from the U25 Grand Prix divisions to victory in an FEI 4-star event. She currently campaigns her two show jumpers, Atticus Diamant (a.k.a. Monty) and Maharees Rock (a.k.a. Rocky), at the FEI level. Both had excellent results during WEF 2020. Her international equestrian CV also includes Spruce Meadows, The Hampton Classic, and several junior/young rider South American Games. She and Rocky were in the top 3 in the $30,000 Pilates Rock Grand Prix during WEF 1, and in 2018, Reutter received her certificate of capability for the Pan American Games following a top 3 finish in the FEI 3-star 1.50m Captive One Classic.