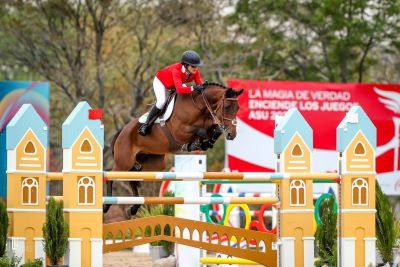 Asunción, Paraguay (October 25, 2022) – Bronze for Chile: international show jumper Gabriela Reutter and Maharees (OBOS Quality x Ballysimon) joined teammates Samuel Parot, Alexandr Imschenetzky, and Ricardo Luttecke Langdon on the podium during the 2022 South American Games (Odesur) held this October in Asunción, Paraguay to claim Bronze for their home country of Chile. Reutter, who was one of the youngest riders in the Games and the only female on the medal podium for the Team Final, also marked the event as her first Senior Games competition and a major steppingstone towards her career goals.

Reutter and Maharees Rock, known around the barn as Rocky, kicked off their first senior international Games with a few rails in the Table C, but persevered to finish 7th individually on the final day and 14th overall. Rocky’s international career has been nurtured for the past three years by Reutter, who was immediately drawn to the mare’s scope and personality. With a major international Games under their belt and a Bronze Medal for Chile, Reutter and Rocky are setting their sights high for more international results in the coming months and years.

“Overall, the South American Games were an amazing experience,” said Reutter. “My teammates were incredible and it was so exciting to help them bring in a Medal for Chile. On the first day Rocky and I were really over focused and it cost us a few rails in the Table C, but she went on to show true staying power and skill over highly technical courses. I’m so happy with how she jumped; she really proved she is ready for a championship. Our team had two very experienced competitors and two who were relatively new to the international stage, so it was a great mix and a great way to learn the ropes of competing at this level.”

The South American games are usually used as a qualifying competition for the following Pan American Games, but as the 2023 Pan Am Games are being held in Santiago, Chile, the home team is guaranteed a spot. Reutter and her teammates look forward to the chance to bring home another medal on their home turf.

To date, Gaby is currently the #1 female Chilean show jumper, and has multiple top finishes in international FEI classes, including her Nations Cup accomplishments, European tour, the U25 Grand Prix divisions, and victory in an FEI 4-star event. She currently campaigns her anchor show jumper, Maharees Rock (a.k.a. Rocky) and a string of sales horses. Her international equestrian CV also includes Spruce Meadows, The Hampton Classic, and several junior/young rider South American Games. She and Rocky were in the top 3 during this July’s Tryon Summer 5 $75,000 Grand Prix CSI2-star, out of 50 entries and top 3 in the $138,600 Turtle Creek Casino & Hotel CSI3* Grand Prix during the 2022 Great Lakes Equestrian Festival. In 2018, Reutter received her certificate of capability for the Pan American Games following a top 3 finish in the FEI 3-star 1.50m Captive One Classic, and has her sights set on representing Chile internationally this fall and winter.