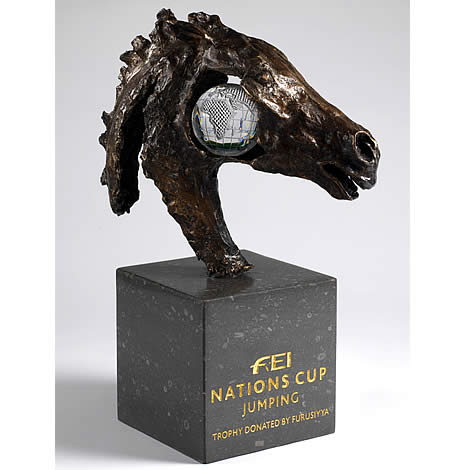 The fabulous new Furusiyya FEI Nations Cup Jumping trophy will be claimed by the winning team at the Final of the inaugural Furusiyya 2013 season in Barcelona, Spain next September.

Lausanne (SUI), 1 May 2013 – The Furusiyya FEI Nations Cup 2013 series resumes in earnest this week, with simultaneous action at both Lummen (BEL) and Linz (AUT) on the afternoon of Friday 3 May. Both events are part of the Europe Division 2 series – CSIO 4* Lummen hosts eight teams while a bigger field of 11 nations will line out at CSIO 3* Linz.

The FEI Nations Cup Jumping series celebrates 104 years of team competition in 2013, and in this inaugural season of the new-look series under the Furusiyya banner a total of 41 nations will compete at 22 qualifiers around the globe leading up to the world final in Barcelona (ESP) in September.

Furusiyya is the brand name for the commercial arm of the Saudi Equestrian Fund, which finalised a €16 million four-year sponsorship package with the FEI in November 2012. The series began at Al Ain in the United Arab Emirates in February where The Netherlands came out on top and both Saudi Arabia and Qatar qualified for the Final, while the USA claimed victory on home ground at the second leg in Wellington, Florida in March.

Teams at both venues

Each country can only accumulate points in one of the six different leagues, and can only earn those points at designated fixtures. In Division 2, each country has been allocated five legs at which they can pick up their points, and the four countries chasing down those points in Lummen will be Belgium, Finland, Norway and Sweden.

The other teams competing at the Belgian fixture are France, Great Britain, The Netherlands and Switzerland and the competition promises to be hot, with so many top riders in action. The Belgian squad consists of Dirk Demeersman, Francois Mathy Jr., Olivier Philippaerts and Annelies Voselmans along with reigning world champion Philippe Lejeune.

The team from Finland is made up of Anna-Julia Kontio, Henri Kovacs, Kaarlo Kovacs, Mikko Maentausta and Maiju Mallat, while the experienced French contingent of Aymeric de Ponnat, Marc Dilasser, Julien Epaillard, Olivier Guillon and Jerome Hurel can be expected to make an impression.

Guy Williams, Joe Clee, Simon Crippen, Philip Miller and Daniel Nielsen have been named by the British, while Roelof Bril, Peter Bulthuis, Anne-Liza Markinga, Henk van de Pol and Leon Thijssen will be vying to take one of the four spots available on the Dutch team.

The draw for the order-of-go takes place in Lummen tomorrow, 2 May, at 12.00 CEST (local time) and the competition begins on Friday at 15.00 CEST.

The action in Linz will begin an hour earlier, at 14.00 CEST (local time), and the order-of-go has already been decided following the draw this evening:

Course designer in Linz is Austria’s Franz Madl, and Australia will field four riders from their squad of six that includes Evie Buller, Rory Hovell, Sarah Isbister, Philip Lever, William James Passy and Alison Rowland. The host nation will choose from Stefan Eder, Julia Kayser, Astrid Kneifel, Dieter Kofler and Christian Schranz, and they will be sure to put their best foot forward on home turf.

Vasil Ivanou, Maxim Kryna, Yahor Morotski and Ibragim Vaskov are listed for Belarus, while the Danish contingent consists of Lars Bak Andersen, Kim Kristensen, Charlotte von Ronne and Andreas Schou. The British have sent Graham Lovegrove, Timothy Page, Jo Pay, Louise Saywell and William Whitaker – the latter a member of the world-famous family that has made such a massive contribution to the sport of Jumping over a long number of years, particularly through the achievements of senior members John and Michael.

There are some familiar names amongst the German crew of Joachim Heyer, Markus Renzel, Mario Stevens, Maximilian Weishaupt and Jan Wernke, while Billy Twomey will undoubtedly be lending his not-inconsiderable leadership skills to the Irish side that includes two of his own protégés, Anthony Condon and 17-year-old wonder-boy Bertram Allen, who will be joined by Irish army rider Captain Michael Kelly.

The four teams battling for points in Linz are Austria, Belarus, Denmark and Russia.

Linz will be broadcast live on FEI TV – don’t miss a hoof-beat; watch every exciting moment on www.feitv.org.

Both of the Furusiyya FEI Nations Cup competitions taking place on Friday 3 May 2013 are part of the Europe Division 2 series.

A total of eight nations will line out at the CSIO 4* in Lummen (BEL) – Belgium, Finland, France, Great Britain, The Netherlands, Norway, Switzerland and Sweden.

The 2013 season comprises 22 qualifiers in as many countries.

41 nations will seek a place at the Furusiyya FEI Nations Cup Jumping Final 2013 which will take place in Barcelona (ESP) in September.

Furusiyya is the brand name for the commercial arm of the Saudi Equestrian Fund which finalised a €16 million four-year sponsorship package with the FEI in November 2012.

“Furusiyya” (Arabic: فروسيه) – this single Arabic word conveys so much, embracing the idea of horsemanship, chivalry, and equestrian knowledge in general. The term is a derivation of faris, or horseman and faras, a horse.

Longines’ passion for equestrian sports began in 1878, when a timepiece was made with a horse and jockey engraved on the watch face. Over the years, the brand has built strong and long-lasting links with equestrian sports. In 1926, for the first time, the brand was involved as timekeeper for the Official International Equestrian Competition of Geneva. Today, Longines’ involvement in equestrianism includes Jumping, Endurance and flat racing.

Longines is a member of The Swatch Group S.A., the world’s leading manufacturer of horlogical products. With an excellent reputation for creating refined timepieces, the brand, whose emblem is the winged hourglass, has outlets in over 130 countries.