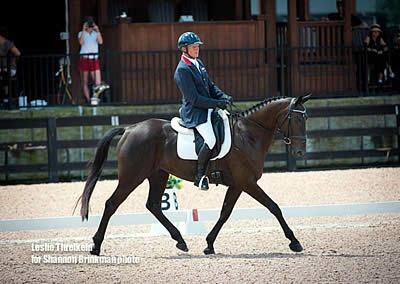 Mill Spring, NC – August 31, 2016 – The inaugural Nutrena® USEA American Eventing Championships presented by Land Rover (AEC) at Tryon International Equestrian Center (TIEC) kicked off with seven divisions taking their turn in the dressage rings in Mill Spring, NC. With ten hours of dressage capped by an exciting Welcome Party, the first day of the 2016 AEC can be deemed a success.

This is the first championship event the venue has hosted for the discipline of eventing and close to 700 entries will compete in dressage, cross-country, and show jumping throughout the week, culminating the seasonal efforts of riders from across the country. Competition will highlight Beginner Novice through Advanced divisions, as well as the “Sounds of Nashville Concert” presented by Coca Cola® featuring country music stars Julia Coles and Mitch Rossell on Saturday, September 3, starting at 6:30 p.m.

Without a single dressage score above a 26.1 in her competition history, the skies were truly the limit for Sky’s the Limit, owned by Tracey Corey, in the dressage ring of the Professional’s Choice Training Horse division. Ridden by Leslie Law, the 6-year-old Westphalian mare (Stravinsky x Desiree) scored a 21.8 to lead the packed division, where each of the combinations sitting in the top 25 all scored sub-30.

“I am pleased with the way she handled it all quite honestly because she is inexperienced and it is quite an occasion to walk in there,” said Law. “Apart from her actually putting down a really good performance, I was delighted with her temperament. She makes my job very easy because she has three super paces and a super temperament. She is very laid back, so it really is about her education at this point and teaching her to be in a better balance and keeping her supple.”

While Sky’s the Limit was all class in the dressage ring, she still is very young. “She has only done three trainings,” continued Law. “I imported her from England last November, and she had done very little. From now on this is quite a big test for her, but it is all good experience.”

Law is an AEC regular and this is his first visit to the Tryon International Equestrian Center. “The venue is state of the art; it is unbelievable,” he said. “It looks like everything has been thought of – the horse walkways, the rings, the restaurants, the bathrooms. The jumps are beautiful; obviously a lot of work has done a lot here to lay down decent ground. There is going to be a lot for them to gallop around that first field. As time goes on it will be excellent.”

Sitting in second place is Tender Bravissimo, owned by Dare to Dream Team, and ridden by Courtney Cooper. The 7-year-old Holsteiner gelding scored a 22.5, while there is a tie for third on a 22.7. Both piloting mares into the top three, Denise Goyeaand aboard Highlife’s Je T’aime, an 8-year-old Oldenburg (Highlife’s Der Dollar x Jeunesse D’or) owned by Madeline Hartsock, and Lynn Symansky and SpectraVET Cohiba, a 6-year-old Wurttemburg (Con Spirito x Lea) sit in a two-way tie for third.

Sandra Holden and her own Cano Cristales (Conteur x Hauptstupbuch Konny) made their way to the top of the leaderboard after a strong showing in the Professional’s Choice Master Training Amateur division, receiving a 21.6 to sit in first place heading into cross-country Thursday. The pair, who traveled from New York, has been working on their connection and communication, specifically in their transitions leading up to the event.

“We were having some trouble with our walk to trot transitions, from the free walk to the medium walk and then the trot. I couldn’t get it on the mark and it felt like he just couldn’t get on the aids. I worked really hard on that with my trainer before we came and on grounds here,” said Holden. “I felt really good about our test. He was with me the entire time and when I came out, usually I think my dressage test is awful, but it was one of the first times that I came out and was satisfied with the test.”

Holden and the 13-year-old Hanoverian have been together for almost seven years and originally the gelding started off as a dressage prospect, never encountering an opportunity to test the waters of eventing before his purchase. Holden, who was just getting started in the sport, found herself quickly attached to Cano Cristales and the pair has been consistently working and winning at Training for the past three seasons.

“He’s turned out to love jumping and we’ve gone from Beginner Novice up to Training. He progressed quicker than I did. This season, I finally feel like we’re ready for the next step. He excels in dressage but it would be a super close call with cross-country. He eats up all of the courses and gets more excited for that than anything in the three phases.”

Ruth Bley and Spartacus D’L’Herbage, a 10-year-old Selle Francais gelding, are currently sitting in second place heading into cross-country after earning a 23.4, while Nanette Shumaker and La Cosa Nostra, a 9-year-old Dutch Warmblood gelding by Kevekka, rounded out the top three with a 24.6 for third. The Professional’s Choice Master Training Amateur Division sets out on the course Thursday between 11:00 a.m. and 3:00 p.m.

Chumley is a full-time dressage trainer with “an annoying eventing habit,” and “Niko” was bought to be a dressage horse, so no one was surprised to see her atop the leaderboard. This pair competes at Second Level, schools Third Level at home, and is aimed at the dressage regionals in just two weeks’ time.

She balances her double life to get the best of both worlds. “Oh, God. I think I need it. I love dressage; don’t get me wrong. I just think the eventing keeps you brave,” she laughed. “I think six days a week of dressage in a ring is a lot, and I’ve always loved eventing, so I think it’s really good to get them out of the ring. It makes them braver. It makes them smarter, and I think it keeps their minds fresh.”

Following Chumley is Mr. Mitchel, a 4-year-old Irish Sport Horse owned by Stephen Blauner and ridden by Doug Payne, as the pair sit on a 28.3. Susan Thomas and Tango were the final members to round of the top three after dressage. Tango is a 13-year-old Paint gelding owned by Leslie Allen and will head into the second day of competition with 30 penalty points after the first phase. The Broadstone Beginner Novice Horse division starts the day Thursday on the cross-country track at 8:00 a.m.

When Anna Kristen Paysinger entered the AEC with her 8-year-old Oldenburg mare, Lusitana (Linton x Espersica), she wasn’t expecting to be sitting in the press conference following the first phase of the Professional’s Choice Training Amateur division. Paysinger and “Luna” earned a 25.0 to lead the 37 entry strong division.

“The biggest thing with my mare is keeping her relaxed,” said Paysinger. “She definitely has it in her if she stays quiet. She likes jumping better than dressage, so dressage has been a little bit hard, but she is coming along. She is pretty much a cross-country machine, so if I can just steer correctly and put my leg on she should be fine. Show jumping might be a bit tricky because of the atmosphere in the arena.”

Paysinger rode as a kid, competing at Novice on a Connemara pony, but only returned to the sport four years ago after an extended break to go to college, medical school and complete her residency. A recent move to Aiken, SC to be closer to family while working night shifts as an E.R. doctor has given her the time to come back to eventing. “I started my mare in tadpole and she was a green 5-year-old, so we have just been chipping away at it.”

A mere .9 points behind Paysinger is Nicole Carolan and her own Topgun, a 10-year-old Dutch Warmblood (Buskhill Gunnar x Wait for the Will), who she took the ride back from Sinead Halpin in May of this year. Rounding out the top three is the 8-year-old Thoroughbred gelding, Sapphire Storm (Orchard Park x Sailor’s Gold), owned and ridden by Patricia Hidalgo who scored a 26.4.

Cooke, who rides with Canada’s Chef d’Equipe Clayton Fredericks, was pleased to see their dressage score reflect recent tune-ups on the flat. “We’ve been working on getting her a lot stronger. I had lessons with Clayton in the last couple of days that helped but the pieces all together,” she explained.

Though she wouldn’t choose a favorite, if she could, this mare might be it, and for good reason too. Cooke has big plans for her future, stating, “She’s such a cool young horse. She’s got the best brain out of any horse I’ve ever ridden. This mare is aiming for the one-star in Ocala, and then eventually being on the Canadian team. That’s the ultimate goal.”

With only a small gap in the scores, Cooke will need to keep an eye on her watch Thursday, as Allison Springer and Lord Willing (Lord Z x Legende IX) are hot on their heels. The Lord Willing Syndicate’s 8-year-old Holsteiner sit on a 25.3 going into cross-country, while Boyd Martin finished the day in third with Barry, a 7-year-old Thoroughbred owned by Windurra USA. The Preliminary Horse division starts on course Thursday at 3:20 p.m.

Plain Dealing Farm’s Cooley Daydream is only 5 years old and in only her fifth event, she belied her age and experience, scoring a 24.3 to lead the Novice Horse division with Lucia Strini. The Irish Sport Horse mare by Chacoa is normally ridden by Lucia’s sister, Benita, but Lucia took the ride over for the AEC.

“I really like bringing on the younger horses, so when we got her for Benita we knew that I might help along with the process,” Lucia explained on why she took over the ride temporarily.

“She is really bold and she loves cross-country, but with the derby field it will be about making sure she knows which jump she has to jump,” continued Lucia. “It is beautiful, but it is definitely a lot to look at. She did some show jumping in Ireland so should be pretty comfortable in the atmosphere there.”

Ruth Bley made her journey across the country from California well worth it, as she sits atop the pack in the Preliminary Amateur division with Rodrigue Du Granit. The 11-year-old Selle Francais gelding (Robin II Z x Delight Gree) earned a 27.2 looking forward into the cross-country phase in first place. Nita Sanfilippo and Alarmabull are just behind Bley, as the 9-year-old Thoroughbred gelding (Hook and Ladder x Shesabull) scored a 28.5. Randa Sorzano and Pleasant Rendezvous, 9-year-old Thoroughbred gelding, earned a 30.5 for third place.

The Nutrena® USEA American Eventing Championships (AEC) presented by Land Rover is the pinnacle of the sport for the national levels. Held annually, this event draws together the best competitors from across the country vying for national titles from the Beginner Novice through the Advanced level. This year’s AEC is being held at the Tryon International Equestrian Center in Mill Spring, NC from Wednesday, August 31 through Sunday, September 4.