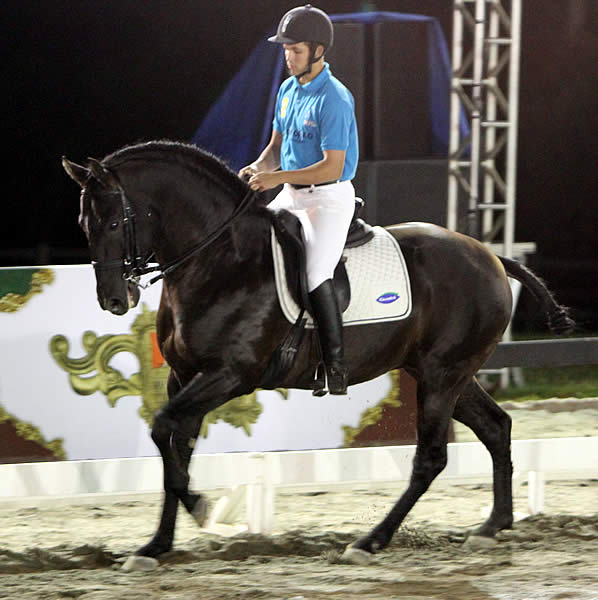 Itapira, Brazil (June 18, 2013) – Interagro Lusitanos have proven once again that they are a force to be reckoned with in the world of international equestrian competition.  A string of wins at the 1st Annual International Riding and Dressage Meeting (IDRM) at Coudelaria Illha Verde, Brazil included top placings in dressage and working equitation.

The stunning black stallion Zingaro Interagro (Perdigueiro (MAC) x Olimpia Interagro) and rider Luan Carlos Brito took the win in the Open division of working equitation, a discipline born from the skill and athleticism needed by horses on working farms and ranches.  A well-known discipline in Brazil, it has its roots in Portugal, Spain, France and Italy and is quickly gaining popularity in the United States.  Working equitation tests the horse and rider in three phases: dressage, ease or skill with obstacles, and obstacles at speed.  Steeped in history and designed to preserve and carry on the cultural traditions of each country and their horses, working equitation harnesses the Lusitano’s natural grace, athleticism, and intelligence.

Interagro also had success in the dressage arena, where Zepelim Interagro (Quinarius Interagro x Ordenada Interagro) placed 2nd in the CDI at Prix St. Georges to qualify for a spot to compete on the Brazilian Team for the 2015 Toronto Pan Am Games.  Trainer and rider Pia Aragao also rode Vade Mecum Interagro (Noblissimo Interago x Pecunia Interagro x Yacht SA) to a third place in the Intermediare II class, and scored well in the pair’s first freestyle at that level.  The Interagro horse is no stranger to success in the dressage arena, and is a favored dressage mount for both professionals and amateurs due to their willing temperaments, athleticism, and trainability.

Cecilia Gonzaga, Managing Director of Interagro Lusitanos, said, “We are so very proud of our horses and riders.  Having a horse in the running for the Pan Am Games is a great honor, and Zingaro’s success on the international stage is such a thrill!  He is a favorite stallion here at the farm and a few of his progeny will be offered for sale at our annual auction.  His beauty, temperament, and athleticism make him a perfect representative of the Lusitano breed and Interagro’s breeding program.”

Interagro Lusitanos have gained a reputation as being an elite choice among international equestrians. Their annual Interagro Collection National Auction will be held this year on August 31, 2013 in Itapira, Brazil. Interagro expects around 500 spectators, many of which visit from the United States and abroad. Last year, international buyers purchased 9 of the 12 adult Lusitano horses presented at the auction.

The Interagro horse is a modern Lusitano, a horse that excels in the traditional equestrian disciplines, from dressage and driving to jumping and working equitation. Interagro horses can be seen driving, working, and training on the farm in Brazil every day. Interagro is committed to preserving the pure bloodlines of the Lusitano breed, and Interagro bloodlines include some of the most respected bloodlines in the breed such as Farao (JHC), Nirvana Interagro, Ofensor (MV), Xique-Xique (CI) and Yacht (SA).

For more information about Interagro Lusitanos, visit their website at www.lusitano-interagro.com.

Founded in 1975 by Dr. Paulo Gavião Gonzaga to preserve the Lusitano breed, Interagro Lusitanos is now recognized as the world’s largest breeder and exporter of Lusitano horses. Dr. Gonzaga started with a small band of four mares and one stallion imported to Brazil from the breed’s native Portugal; to date over 600 horses populate the 1200-acre ranch outside São Paulo. Today, Cecilia Gonzaga manages the farm and operations. Interagro Lusitanos are handled, prepared, and evaluated from birth, with a handful of the best stock presented at auction each year.