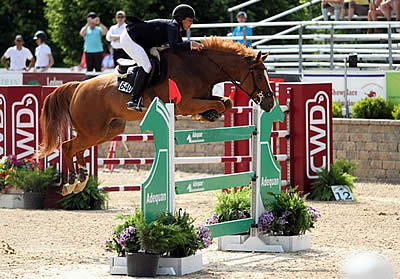 Spectators gathered around the Lamplight Equestrian Center grand prix arena and watched a field of 30 horse and athlete combinations take on the questions Cruz posed at the popular show jumping event.

“You try to make interesting technical questions for the riders,” Cruz said. You play with the distances, the material, with the jumps and the colors. You want the horses to go forward and then ask questions of short and long.”

Liz Atkins, who finished second with Benchmark Stables’ Undine, agreed. “I like her courses,” she said. “The fact that the rails are spread out all over the place, not just in one or two jumps. She sets difficult but doable courses.”

Out of the starting group, eight horses and riders progressed to the jump off round. Atkins and Undine were the first to be double clear with a time of 38.805 seconds.

“I’ve had this horse since she was 5 years old,” Atkins said about Undine, who she purchased as an unbroken broodmare from Karen and Blair Cudmore. “The mare is amazing. From the moment I sat on her for the first time, her goal has been to please me. She’s never going to give less than 110 percent. There’s no doubt in my mind that when I go in the ring she is going to try to jump clean for me.”

Lauren Ditallo and Wadisson, owned by High Finance Farm, were next to finish the second track fault-free but were more than a second slower.

Goldman returned for her second round with Morocco, who was raring to go. The pair put in a blazing fast round timed at 35.755, putting the pair in the lead. Freddie Vazquez returned on Messenger Hill Farm’s Bachelor 4 and were the final pair to be double clear, stopping the timers at 39.898 putting them in fourth place.

“With Morocco, if there’s an option I tend to add it in with him,” Goldman said. “I’m quick around the turns and fast across the ground. I didn’t do the leave-out in the first line.”

Goldman has no idea how many grand prix events she and Morocco have won. Her friends joke with her about her success.

“What can you say? They are so fast,” said Freddie Vazquez as he congratulated Goldman.

“Lisa is a really good friend of mine,” Atkins said. “I joked with her during the award ceremony: ‘That darn Morocco – he’s a little cow horse!’ We’ve always been supportive of each other. If I have to finish second to someone, I’m OK doing it with her.”

Goldman shared that Morocco lost a shoe right before the first round, delaying her start. Her farrier, Matt Connelly, had come to watch her ride and tapped the shoe back on just moments before her first round.

“Every person here helps in some way,” she said. “They all ride horses up to the ring for me. They help set jumps. They watch. They get water for each other. Everyone helps everyone.”

Atkins agrees. “That’s one thing I love about Chicago. We’re all here cheering each other on and helping each other out – whatever we need. It’s like family.”