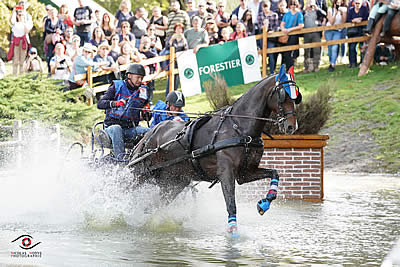 The brilliant performances of France’s three carriage drivers drove France to the top of the CAIO 4*-H1 podium at the Pau 5* horse trials. Jean-Michel Olive, leading Sinnamari, won the marathon. France pipped Germany and Netherlands to the post. The victory is a good omen for next year’s World Championship, which will also take place here in Pau, France at the Domaine de Sers.

“This win is a wonderful team victory! Everyone contributed to France coming out on top in this competition even though the scores were very close throughout the competition! We gave everything we had in the marathon and that’s what made the difference in the end. I came third in the individual tests and the marathon meant that I lost one place, but I’m sort of discovering this discipline as I don’t have much experience in carriage driving. I’ve only been driving my horse for three months so I can’t complain and I’m really happy with my third place.”

“It was a long way to travel from Germany to Pau, but it was well worth the effort: the competition was amazing. The team comprised three young female drivers, so our second place here is entirely thanks to ‘young girl power’! In the marathon, there was a real challenge to negotiate in the two long water obstacles and that really put the horses to the test.”

“I was already here last year for the Pau 5* eventing competition, and I came back this year. I wanted to end the season better than it had started with my horse’s injury. I love the Pau competition, even if we have to drive 1500 kilometres to get here from home…”

“I was first in the dressage test and managed to hold my lead with two clean sweeps in the cones competition. In the marathon, which isn’t really my strong point, I did my utmost to keep my first place, and I made it! We’ve had a great season this year and we’re going to work hard this winter to prepare for the next one. There weren’t any specific difficulties in the marathon; it was a pretty fast course apart from a mound which caused a few problems. ”

“I’m delighted with this dress rehearsal for the carriage-driving world championships which is to take place here at the Domaine de Sers next year. I’d like to express my heartfelt thanks to French driver Marion Vignaud, who won here last year and has been an amazing ambassador for Pau throughout the entire year.”