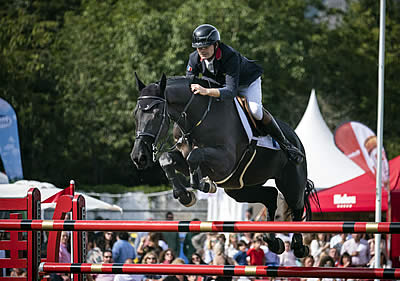 Team France won the last qualifying leg of the FEI Nations Cup™ Jumping 2017 Europe Division 2 series in Gijon, Spain where, in a roller-coaster of a competition, The Netherlands finished second ahead of Ireland in third.

The French were already out in front on a zero score at the halfway stage, but were being closely chased by Canada carrying just a single time fault. However, the course designed by Spain’s Avelino Rodriguez-Miravalles saw some serious shuffling of the pack as the second round progressed. And the Dutch, lying joint-third with Spain and Mexico, and Irish who were in joint-sixth with Great Britain, were rewarded for holding their ground while those around them lost theirs.

When Kevin Staut (36) and For Joy van’t Zorgvliet HDC hit the middle element of the triple combination three fences from home and Gregory Cottard (39) and Regate d’Aure lowered the bogey final fence to also collect four faults second time out, then it fell to French anchorman Nicolas Delmotte (39) and Ilex VP to save the day as the best three scores per team would be counted and his side was now carrying four faults. Edward Levy (23) and the fabulous stallion Sirius Black had followed up their single first-round error with a great clear, but only the same from Delmotte would prevent a jump-off against the Dutch who, like the Irish, were fault-free at their second attempt.

“Being last to go I felt the responsibility, but I had confidence, and I had a horse that responded brilliantly!” — Nicolas Delmotte (Team France)

French Chef d’Equipe, Philippe Guerdat, was delighted with his country’s eleventh FEI Nations Cup™ success at the famous Las Mestas Arena in Gijon. “This is a lucky venue for us!” he said.

Kevin Staut FRA (winning team): “I am very happy – this is my second Nations Cup win in this city!”

Shane Breen IRL (3rd placed team), talking about the bogey fences: “Fence eight was like a gate, a stile type fence and it was narrow. There was a roll-back up to it and some lost a bit of balance on the turn and found they didn’t have the space to jump it. It was very light and short and it looked quite tall. The last fence came after the triple bar and there was a floaty six strides to it. It was cleverly designed with a white plank at the bottom and on the top, and some horses slightly misjudged it.”