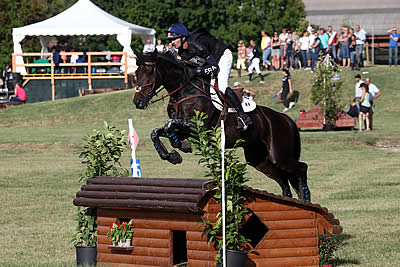 Lausanne (SUI), September 20, 2016 – French riders are on a roll following their triumph at the Rio 2016 Olympics and have now won their first FEI Nations Cup™ Eventing leg this season with a victory in a close competition at the new northern Italian venue of Vairano (16-18 Sept).

This was the first leg that Great Britain, currently the series leaders, have not contested and, as a result, their lead has shrunk to just 15 points over Germany, the runners-up in Vairano by just 1.1 penalty, with two legs left to go.

Germany’s Andreas Ostholt, who missed out at the last minute on a place in the Olympic silver medal team, had some compensation when leading throughout and taking individual honours at Vairano on the 16-year-old mare Pennsylvania 28.

French team member Francois Lemiere was second on Ogustin du Terroir with the fastest Cross Country time (0.4 penalties) and Pietro Sandei, riding Rubis de Prere, was third for the home side, Italy, who also finished third in the team classification.

The competition, held on farmland south of Milan, had a new and inviting CIC3* Cross Country track, with a great variety of fences designed by Mark Phillips (GBR). There were 24 clear rounds from the 29 starters.

The FEI Nations Cup™ Eventing action moves next weekend to Waregem in Belgium for the penultimate leg.

The FEI’s team Eventing series, the FEI Nations Cup™ Eventing, is open to all nations fielding one team composed of 3 or 4 riders at each leg, and runs under FEI Eventing rules at CICO and CCIO 3* level with riders accumulating points under a dedicated system detailed here.