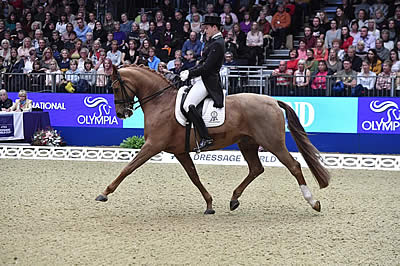 Day two of Olympia, The London International Horse Show promised to be a spectacle and it certainly lived up to expectations. The FEI Dressage World Cup™ Grand Prix Freestyle supported by Horse & Hound was won by Germany’s Frederic Wandres on his chestnut gelding, Duke of Britain, in a nail-biting finish.

Ahead of the start of the Show’s evening performance, the top eight Service Show Jumpers competed in the Services Jumping Championship. After a closely fought two rounds it was LCpl Laura Charley from 16 Signals Regiment and Vice Versa who took the spoils, with the Royal Navy’s Petty Officer Sophie Fuller and Infinaty and LCpl Holly Hall of 254 Medical Regiment, The Royal Logistics Corps and WKD San Remo slotting into second and third places, respectively.

After the presentation of the awards for the Services Jumping Championship, the crowd was treated to a mesmerising display of natural horsemanship by Spaniard, Santì Serra, who is widely regarded as one of the most accomplished equestrian artists in Europe. Through an astonishing level of trust and confidence, the 30-year-old “Horse Whisperer” from Barcelona demonstrated his extraordinary talent of controlling three of his horses with his mind and body. The Osborne Refrigerators Shetland Pony Grand National was won by Alfie Diaper and Damerham Briar Lilly.

The result could not have been closer with two riders finishing on an equal score in the FEI Dressage World Cup™ Grand Prix Freestyle supported by Horse & Hound. The win, however, was awarded to Frederic Wandres and Duke of Britain (80.030%), the first German combination to win the World Cup leg in London. The pair headed the class by virtue of higher artistic marks, meaning British favourite Charlotte Dujardin and Hawtins Delicato had to settle for second place.

Dujardin and ‘Del’ were the first to set the competition alight with their expressive kur set to the familiar compilation from ‘How to Train Your Dragon,’ a freestyle which was first performed by Dujardin on Valegro in 2011. Frederic and Duke, third in last night’s Grand Prix, were, however, always going to be a threat and the pair did not disappoint, performing a fluent and mistake free test with a high degree of difficulty. The attractive chestnut, like Delicato, is also British bred and did not miss a beat, willingly performing canter pirouettes to tempi changes and passage to extended trot and back.

“For me to reach the magical 80% is a dream come true, especially in the company of these riders,” said Wandres, who attributes much of his success to the solid temperament of Duke, who is by the well-known stallion Dimaggio and was bred near Windsor by Tony and Sarah Pidgley .

Dujardin was equally delighted with her ride on ‘Del’.

“Yesterday he was a bit sticky in the arena so today I was better prepared,” said Dujardin, who was taking Del though only his second ever freestyle.

“He is still relatively inexperienced, and nothing can prepare you or your horse for the atmosphere of this arena – which is just the best and there is no show like it,” said Dujardin. “All I really wanted to do was come away with a positive experience, so I couldn’t be any more pleased.”

Dutch Olympian Hans Peter Minderhoud was not quite as happy, having to settle for third place with the young breeding stallion Glocks Dream Boy (77.990%) who sadly, like many others, made some technical mistakes, which ultimately proved too expensive in the loss of marks.

British rider Hayley Watson-Greaves and her longstanding partner Rubins Nite delighted the home crowd with a fluent and assured freestyle that put them in fourth place.

The FEI Dressage World Cup™ series of qualifiers continues through to next April when the final takes place in Gothenburg, Sweden (3-7 April).