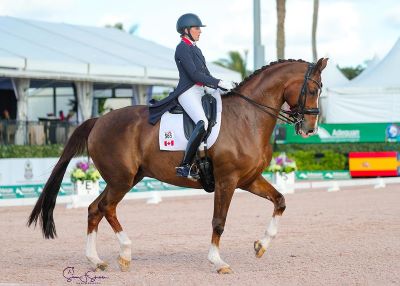 Wellington, FL – February 12, 2021 – Week five of the 2021 Adequan® Global Dressage Festival (AGDF) continued on Friday, February 12, at the Palm Beach International Equestrian Center (PBIEC) in Wellington, FL with a winning ride in the FEI Grand Prix CDI-W presented by Helgstrand Dressage for Brittany Fraser-Beaulieu (CAN) and All In.

Coming into the Global International Arena as the final combination of the day, Fraser-Beaulieu and the 2005 KWPN gelding by Tango, owned by Brittany Fraser and Marc-Andre Beaulieu, climbed to the top of the leaderboard with a final percentage of 73.696.

“I feel really relieved that we had such a good test today,” began Fraser-Beaulieu. “To be honest, I think this was probably our best Grand Prix to date. He was really on the aids and totally focused. Last year I started cutting my warmup to 15 minutes because he’s so big. I take him out and stretch him in the morning and then have a very short warmup. It’s working for us so far, and today he stayed totally with me through the whole ride. It was really incredible.”

Fraser-Beaulieu and the gelding earned their highest Grand Prix CDI-W score ever, after competing for the first time in over 10 months at AGDF 3. “I was a little nervous getting back into the ring,” she admitted. “I had such an amazing finish to last season, and I had almost 10 months of no showing, I was praying I was going to come out strong, but you never know! All In and I have such a long partnership and I know him so well. I’ve had him since he was five. We’ve shown everywhere, so as long as I know he’s feeling well, and I ride well, I know we’ll have a good test. I just had to get my confidence back and get the nerves out, and then I was able to ride more confidently today.”

After their performance, Fraser-Beaulieu has decided to set her sights on the FEI World Cup™ Finals, but will play the rest of the winter competition by ear, depending on All In.

“I just decided that I’m going to try for World Cup™ Finals,” she stated. “Things are a little up in the air still with the rest of the season. I’d like to do the five star, to get another [Grand Prix] Special under our belt for the Olympics. We are just going to take it show by show and see how All In feels. If he needs to go, we’ll go; if he feels tired, we will take a break. I’m pretty flexible. We are fortunate to have so many shows here, so we’ll take it as it comes.”