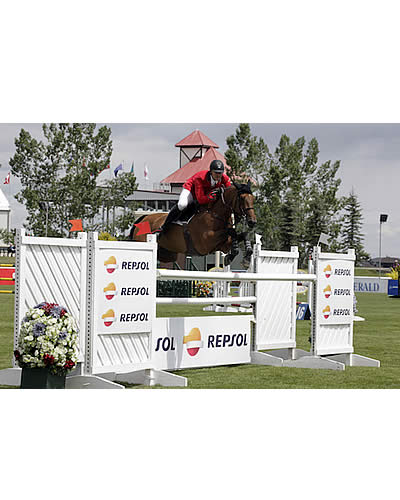 Anthony D’Ambrosio (USA) set a challenging track for horses and riders in the $85,000 Repsol Cup. Fourteen of the 63 entries were unable to finish the course, and the faults were numerous for many others. Only three entries came out of the first round without fault to advance to the jump-off.

Bloomberg was first to go over the short course with Gotham Enterprizes’ Caleno 3 and cleared the track in 41.60 seconds. Rodriguez followed aboard Darlon van de Groenhove with a rail at the last fence in 41.76 seconds. Last to go, Mathy and his own and Team Harmony’s Polinska des Isles took the win in a time of 40.15 seconds. They earned the winning prize of $28,050.

Mathy and Polinska des Isles also earned a 1.60m win on opening day of the ‘National’ Tournament two years ago, but the rider noted that this was their biggest win together at Spruce Meadows. He has had the mare for seven years, since she was five years old, and was happy to get another great victory.

“This is a big win. I have had wins here, but I think this is quite a good win for her,” Mathy acknowledged. “She has been my top horse for quite a few years. She has placed in the ‘Masters’ here also and we were double clear in the Nations Cup. I think she likes Spruce Meadows. She is a very good mare and she is performing well.”

Commenting on the win, Mathy stated, “First of all, it was tough just to get in the jump-off. There were a lot of retirements and faults; it was a tough course.”

“In the jump-off, I think I was faster on the rollback to the blue vertical,” he continued. “The mare turned really well there, so I think that is where I made a bit of time. Georgina had a really super jump-off. She had every distance right and forward; I just think I was a bit tighter around that turn.”

Originally, Mathy did not plan to jump on Saturday, but he still needed to qualify for Sunday’s grand prix.

“I had to change the plan a little bit because Plan A was to jump her yesterday and then the grand prix tomorrow, but then I had two down yesterday. She was a bit fresh, so I had to ride again today to qualify for the grand prix. It was bad news yesterday, but it helped me to win the competition today. Now tomorrow she will do the grand prix. I think today took a little bit out of her, but she has blood and she is a fighter, so hopefully we can perform well tomorrow as well.”

Mathy will return home for two weeks and then returns to compete in the last two weeks of the Summer Series. Fans can watch him jump one more time this week as the ‘Continental’ Tournament CSI 5* concludes in Sunday’s $400,000 CP Grand Prix.