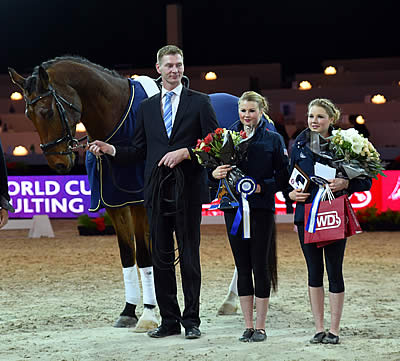 It was an emotional evening on many levels as Male Individual title-holder, Nicolas Andreani, came out of retirement to compete in his home city at the invitation of the Organising Committee. And it was as if he had never been away when he posted the winning score for the second night in a row to top the podium this evening.

However, the 31-year-old vaulter was only making a guest appearance and was not chasing points in this season’s series, so the maximum number of points went to runner-up Clement Taillez while another Frenchman, Ivan Nousse, lined up third.

It was Italy’s Anna Cavallaro who produced the first victory of the night with a dreamy and dramatic performance that was light, confident and harmonious. The 29-year-old athlete scored 8.318 to win yesterday’s class, but she wasn’t entirely happy with that. “I made some mistakes in the first competition, but this evening it felt perfect for me and my horse and for Nelson,” she said, referring to her lunger, Nelson Vidoni.

The vaulter who took individual silver at the Alltech FEI World Equestrian Games™ 2014 in Normandy (FRA) finished third at the 2014/2015 FEI World Cup™ Vaulting Final in Graz, Austria earlier this year and has achieved all of her top results, including the silver medal she won at the European Championships in Ebreichsdorf two years ago, partnering the chestnut gelding Harley, who is now 18 years old. “Harley and I are together a long time – since the World Equestrian Games in Kentucky in 2010 – and we know each other very well,” Cavallaro pointed out this evening after scoring 8.441 which earned her the winning two-day total of 8.380.

Talking about her musical score, Cavallaro, who is based in Verona (ITA) where she and Nelson Vidoni teach disabled children to ride, explained, “It is from Anastasia, and the style of music helps me to be calm and quiet, and to relax and yet I can feel the emotion in it, and I hope the audience feels that too.”

In both competitions the Italian vaulter pinned Manon Noel from France into second place and The Netherlands‘ Carola Sneeks into third. Tonight Noel, her horse Kirch de la Love and lunger Kevin Moneuse came much closer to the winner when posting a mark of 8.106 for an overall total of 8.005.

The clean sweep by the French in the Male Individual came as no surprise, as Andreani also headed Nousse and Taillez, in that order, yesterday. But although Nousse was awarded first place by the horse judge in both rounds, he was edged down to third tonight when Taillez upped his game.

A member of the bronze medal winning French Squad at both last year’s FEI World Equestrian Games™ in Caen (FRA) and this year’s FEI European Championships in Aachen (GER), 25-year-old Taillez produced a performance that was elegant, clean and controlled. And with strong performance marks of 8.540 from judge at B, The Netherlands‘ Heddy Boelsma Den Hartog and judge at D, Martine Fournaise from France, he racked up 8.017 tonight which brought his total to 7.954 for second place.

Nousse, bronze medallist at the FEI World Vaulting Championships at Le Mans (FRA) in 2012, was partnering the powerfully-built 11-year-old black stallion Ede, but the 28-year-old vaulter’s artistic score was lower this evening and his final tally of 7.778 was only good enough for third this time around.

Andreani, however, was in a class of his own as he played out his Einstein interpretation with professionalism oozing from every movement, and although his artistic scores were not as high as yesterday – when he posted 9.347 and 9.533 – he set off a torrent of applause after presenting the perfect dismount for the winning mark of 8.377 and the overall winning total of 8.529.

Just three pairs contested the Pas-de-Deux in which Germany’s Timo Gerdes and Jolina Ossenberg Engels set the target with their Romeo and Juliet interpretation for a score of 6.741 and a final tally of 6.743.

Nousse’s horse, Ede, was back in action again, this time carrying the brother-and-sister combination of Lucie and Simon Chevral from France who won the CVI in Bern (SUI) earlier this year and who were competing in their very first FEI World Cup™ competition. And their brave programme earned them today’s highest score of 7.772 but it wasn’t quite enough to overtake yesterday’s winners, the American sisters Cassidy and Kimberly Palmer.

This pair has enjoyed a tremendous 2015 season and, last to go with their horse Zygo and lunger Maurits de Vries, they set off to a Christmas-themed accompaniment to post a mark of 7.414 which left them in second place but, when combined with their winning mark of 7.660 from last night, gave them a final scoreline of 7.537 for victory.

The third leg of the series will take place in Salzburg (AUT) on 4/5 December. For information on the Austrian fixture, go to http://amadeushorseindoors.at/ or contact Press Officer Ruth Büchlmann, rb@uppercut.at, +43 676 844180222.