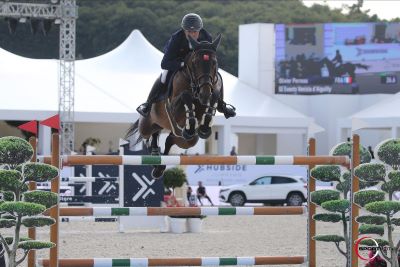 France’s Olivier Perreau and GL Events’ Venizia d’Aiguilly ensured that suspense was at its height until the very end of the class, winning the CSI 5* Hubside Store Grand Prix this Sunday at the HUBSIDE JUMPING de VALENCE (Drôme).  A great sporting occasion for the best riders and horses, cheered on by a very enthusiastic audience.

The experts of world show jumping took part in the CSI 5* 1.60m Grand Prix at the HUBSIDE JUMPING de VALENCE on Sunday afternoon, in front of grandstands which were full and an enthusiastic crowd.  The course designed by France’s Cedric Longis promised some great sport.  Thirty-five combinations were competing in the class: thirty-five possibilities, but just one outcome. Number 10, which was a vertical, the first element of the double, number 12, and above all number 11, which was a plank, cost the riders dearly and were undoubtedly decisive in the class. There wasn’t a clear round until the significant, eleventh combination came into the ring, and after that a string of clears followed. Grégory Cottard and his great mare Bibici, a combination which will be representing France et the next European Championships, proved that it was possible. In their wake, Morgan Bordat and Uma also jumped clear and went through to the jump-off. In total, eleven combinations managed to obtain their ticket for the second part of the class. Five nations were in the running: France, Ireland, Italy, Portugal, and Belgium. The jump-off was impressive and really exciting!

Grégory Cottard on his prestigious grey mare had the difficult task of going first in the jump-off. Well done! The opening combination was not faint-hearted, took a lot of risks and finished clear, in a time of 37:25. So the following riders had to go very, very fast.  It seemed impossible to improve on the time to beat, but that was without counting on Rhône Alpes’ Olivier Perreau and GL events Venezia d’Aiguilly did just that, finishing in 36:92! Incredible!