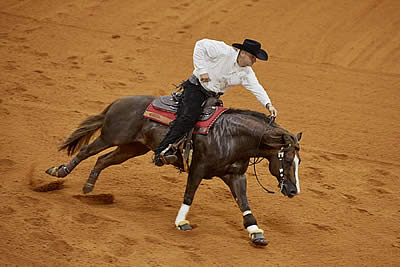 Bernard Fonck and What A Wave (FEI/Liz Gregg)

Reining competition closed the week at the FEI World Equestrian Games™ Tryon 2018 with great performances and big scores as some of the world’s best riders battled it out for the FEI medals at the Johnson Controls Individual Reining Competition finals. When the curtain fell upon the TIEC Indoor Arena, the dream team made up of Bernard Fonck (BEL) and What A Wave once again made history by claiming the gold medal for Belgium with a perfect execution of pattern #12.

The Belgian rider has won close to $1,800,000 in reining competition and his mount, an 11-year-old American Quarter Horse stallion owned by Gina De Pauw and Steve Vannietvelt, who has left his mark in many an international arena with Fonck in the saddle, scored a 227 for the win claiming the highest step of the podium. “This is the first time in history that a European rider leaves the World Equestrian Games with the individual gold medal and I could not be any prouder,” said Fonck. “What A Wave is the sweetest horse I have ever had the pleasure of riding. I am very fortunate to have had more than one ‘once in a lifetime’ horse, and he is at the top of this list. Every time we show, he gives me all he has and every time it gets better and better. When I came here I knew that we could probably make it to the top five positions, but I would have never imagined that we would claim the gold.”

Team USA’s Dan Huss and his double-registered American Quarter Horse and American Paint Horse mare Ms Dreamy, owned by Frederick Christen, set the crowd on fire as they burst into the arena setting the dirt flying and spinning fast to mark a 226.5. The duo clinched the silver medal and they too made history: The talented 8-year-old horse is the first mare to earn an individual medal in reining at the FEI World Equestrian Games™.

“Mares are a little more sensitive, so you have to be very good as far as technique and horsemanship are concerned,” said the 58-year-old professional. “They are not so forgiving but, if you understand them, your better mares will step up and compete with the boys. [Ms Dreamy has] probably taught me more than I’ve taught her, and it’s been a great experience.”

A run off determined who would take home the bronze medal as both Cade McCutcheon (USA), riding Custom Made Gun, and Joao Felipe Lacerda (BRA) aboard Gunner Dun It Again scored a 225 during the finals. They returned to the arena to battle it out and both horse-rider combinations once again thrilled the crowd.

Lacerda and Gunner Dun It Again, a 7-year-old American Quarter Horse stallion owned by Paulo Francisco Tripoloni, laid down a powerful performance paid back by the judges with their highest score of the Games: a 227. “I am so proud of my mount,” he said. “He has a heart as big as this arena and is one of the most powerful horses I’ve ever ridden. He was great for me from day one and I am truly blessed to have had this opportunity.”

Fighting until the bitter end was 18-year-old Cade McCutcheon aboard Custom Made Gun, the flashy 7-year-old double registered AQHA/APHA palomino stallion owned by his grandparents, Tim and Colleen McQuay. Having topped the first individual qualifier with an outstanding 229 score, the pair was last to go in the seeded Individual finals. Once it was time to ride back into the arena, they performed to a 228 score and firmly captured the bronze medal.

“I was a little disappointed with myself after my first ride so I let him catch his breath and, when we went back in, I tried to perform a cleaner run,” said the young rider. “He was incredibly good for me and I am thrilled to have represented my country and to have won the team gold and individual bronze medals. I could not have done this without my team, my coach and my family and I still cannot believe that I made it to the podium. It will take a while before it sinks in!”

Amazingly enough, both Gunner Dun It Again and Custom Made Gun were both bred by McCutcheon’s grandparents and they are both by the legendary stallion Gunner (AQHA Colonels Shining Gun) and out of two mares by yet another stallion that has made history, Hollywood Dun It. Both stallions are owned by the McQuays.