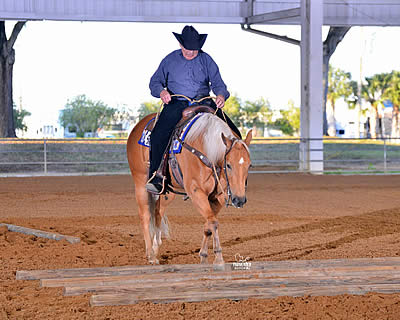 Tampa, Fla. – Dec. 31, 2019 – The Florida Gold Coast Quarter Horse Circuit celebrated another successful year with a tsunami of entries throughout 2020’s five-day event, which was an extra day due to the incredible popularity of the event. Taking place at the Bob Thomas Equestrian Center, top Quarter Horses and riders from North America and Europe traveled to the Florida State Fairgrounds to compete for coveted High Point awards, Circuit Champion awards, and valuable year-end points.

Impressively, the Bob and Karen Johnson Quarter Horse barn took home two Porta Cool coolers. Bob was the High Point winner in Versatility Ranch Horse (VRH) Open with A Busy Affair, and his student, Anna Mackay, captured the championship on Gunna Wreckya in the VRH Youth for the second consecutive year. Bob’s wife, Karen, was the Reserve Champion in the VRH Open on Gotta Hot Gun.

Taylor Kungle and Krymsun Belle marked their final year in the Novice Amateur classes by taking home one of the Porta Cool coolers as the High Point Champion. She is looking forward to moving up to the Amateur division next year.

Sandy Vargo won Senior High Point Award with her 8-year-old gelding, Dancin N The Dirt. Although the Ohio resident hands the reins over to her trainer Chuck Briggs and her good friend Terrie Booth in the show ring, she enjoys their victories as much as if she were in the saddle.