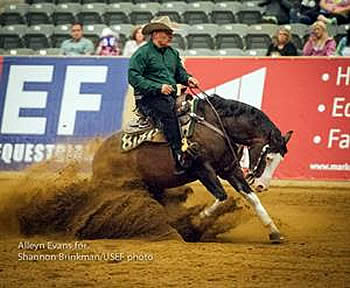 Lexington, Ky. – Sixteen combinations entered the Kentucky Horse Park’s Alltech Arena Sunday morning with National Championship honors and selection for the 2014 Alltech FEI World Equestrian Games on their minds for the second and final round of the Adequan/USEF Open Reining National Championship and Selection Trial for the 2014 Alltech FEI World Equestrian Games U.S. Reining Squad. And in a repeat of Friday’s initial round at the Kentucky Reining Cup, Shawn Flarida posted the top score of the day to claim the National Title and punch his ticket to Normandy, France for the World Championship in August. Additionally, five other riders earned their place on the squad with strong performances over the week.

Flarida (Springfield, Ohio) and Michell Kimball’s seven-year-old Quarter Horse stallion Spooks Gotta Whiz posted a score of 225 in Friday’s first round and bested that by 2.5 points scoring 227.5 Sunday morning. They finished on an overall score of 452.5 to top the field by 3.5 points.

The multiple-time National Champion and 2010 Alltech FEI World Equestrian Games Team Gold medalist was pleased with his horse throughout their time in Lexington and knows that there were some points left on the table.

“Friday night seems like a month ago,” said Flarida. “I had a few bobbles in each pattern but he’s just a nice horse; he’s fun to show and just a great horse.”

Flarida looks forward to getting to Normandy and retaining the title he helped to earn four years ago and believes the U.S. riders are poised for greatness in France.

“They’re all super talented and hardworking,” said Flarida of his squad-mates. “When you get there it’s just time to put your hand down and get to work.”

Earning Reserve Champion honors and her spot on the U.S. squad was Mandy McCutcheon with an overall score of 449. She rode father Tim McQuay’s 10-year-old Quarter Horse stallion Yellow Jersey to scores of 224 and 225 on Friday and Sunday, respectively, to help her become the first women to ever represent the United States at a Reining World Championship.

“The next part is the fun part; this was the nerve-wracking part. I’ll still be nervous but just to get to say you get to go is so fun,” said McCutcheon who will ride alongside her husband, Tom, in Normandy. “For me to be on a team with my husband on a horse my parents own is just so fun.”

Jordan Larson (Whitesboro, Texas) and Heritage Farms’ HF Mobster slid to third place overall by earning 223 and 225 in the two rounds. The six-year-old Quarter Horse stallion finished on an overall score of 448.

Andrea Fappani (Scottsdale, A.Z.) had an extremely successful weekend at the Kentucky Reining Cup qualifying two of Silver Spurs Equine’s horses for the U.S. World Equestrian Games squad. With the seven-year-old Quarter Horse stallion Smoking Whiz he finished in fourth on a total of 446.5 and then piloted the eight-year-old Quarter Horse stallion Custom Cash Advance to a weekend total of 445.

Finishing in sixth place and earning a place on the squad were Troy Heikes (Scottsdale, Ariz.) and Denise Bixler’s eight-year-old Quarter Horse gelding Lil Gun Dunit with a score of 442.

Rounding out the 2014 Alltech FEI World Equestrian Games U.S. Reining Squad after finishing in seventh place are Tom McCutcheon (Aubrey, Texas) and Jennifer Marley’s six-year-old Quarter Horse stallion Dun Git a Nicadual after finishing the weekend on a total of 440.5.

Watch on-demand video from the Kentucky Reining Cup on USEF Network presented by SmartPak at www.usefnetwork.com/featured/2014KRC/.