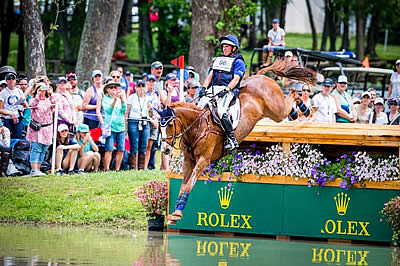 The Land Rover Kentucky Three-Day Event (LRK3DE), which also hosts the Land Rover/USEF CCI4* Eventing National Championship, kicks off this week. This iconic American sporting event, which takes place April 26-29, annually draws top international horses and riders to the Kentucky Horse Park in Lexington, Ky. for world-class eventing competition. We’ll be streaming all three phases — dressage, cross-country, and show jumping — live on USEF Network, so be sure to check out the broadcast schedule and tune in for all the action.

Here are five things to know about the Land Rover Kentucky Three-Day Event as you head into the event.

Land Rover served as the Kentucky Three-Day Event’s longtime Official Vehicle and was Presenting Sponsor for five years before increasing its support by signing a four-year agreement last October to become Title Sponsor. Land Rover also continued its support of US Equestrian, extending its deal with the federation through 2020. Land Rover’s participation also includes the “Ultimate Stable experience,” including a range of top equestrian apparel and equipment, as well as live farrier displays, open in the sponsor village to all attendees. Land Rover also brings back its popular “Land Rover Tailgate Challenge,” in which Land Rover owners compete for an exclusive prize for the most creative and best-catered tailgate party. And ticket-holders can also test-drive the newest Land Rover models on a specially designed off-road demonstration course during LRK3DE.

The highest-placed U.S. rider will be named the year’s Land Rover/USEF CCI4* Eventing National Champion. US Equestrian President Murray Kessler will present the rider with the Roger Haller Trophy bronze for the first time this year. The trophy is given in memory of Haller, an internationally respected eventing official. Friends and family of Haller came together to commission the bronze trophy, which is designed by 1987 Kentucky Three-Day Event winner and 1996 Olympic individual bronze medalist Kerry Millikin. The national champion also receives a silver picture frame and a champion cooler.

LRK3DE, which offers $400,000 in prize money, is also the only CCI4* event in the Western Hemisphere.

Buck Davidson, Phillip Dutton, Lauren Kieffer, and Kim Severson are all multiple-time national champions and have talented mounts who could help them add a title to their resumes again this year. Dutton, who has captured the title five times so far, will try for back-to-back titles this year after earning it last year with Mr. Medicott.