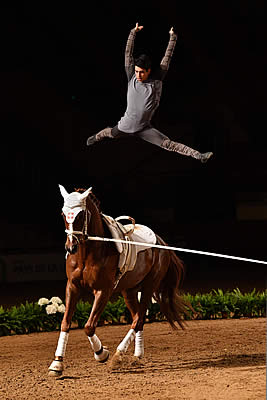 The FEI Vaulting World Cup Final competition is now open in Saumur, the world capital of horseriding and equestrian arts. The first of the two rounds counting for the ranking was played, which will determine the winners of the Final in three categories: female, male, and Pas-de-deux.

In the females round, defending champion, Germany’s Kristina Boe, two-time world and European champion, disappointed in the warm-up. The first to set off on the Grand Manège of the Ecole Nationale d’Equitation, which generally hosts galas and demonstrations by the Cadre noir de Saumur’s riders, the vaulter has returned to her best form. There is only one chance left for her to shine in front of an international audience as Kristina Boe will retire from the sport at the end of the competition. She finished second behind her compatriot Janika Derks, already in the lead in the warm-up. In a more athletic and powerful vaulting than her rival, Janika won over the jury and the public. Third place goes to Switzerland’s Nadja Büttiker.

Among the men, let’s say there was the Colombian Juan Martin Clavijo and the others. This 19-year-old kid, who this year competed in his first FEI World Cup season in vaulting, competes in his first Final, is a phenomenon of grace and flexibility, a legend of equestrian sports in his country. All equestrian disciplines combined, he was the first (and only) Colombian to win world gold in a championship! “I had a lot of pleasure vaulting tonight,” he said after his performance. “That was my main goal.” The FEI World Cup format, which gives us an extra 20 seconds in our freestyle programs, is very welcome. “A star is born! Juan Martin Clavijo leads Germany’s Jannik Heiland in second and Thomas Brusewitz in third. On the French side, Clément Taillez, the only Frenchman to qualify for the FEI Vaulting World Cup Final, is in fifth place. Satisfied with his performance, the external resident of the Saumur’s vaulting Pôle France flew in front of his audience, on a delicate Ave Maria. “I promised myself a day of vaulting on an Ave Maria; I said to myself, ‘When I get strong, I’ll vault on it.’ I just had to wait until I was ready to face such a musical masterpiece.” The time for Taillez seems to have come and the Frenchman will be keen to aim for a podium, at the second round of this FEI World Cup Final.

Last category, the Pas-de-Deux, is led again by a German couple, Theresa-Sophie Bresch and Torben Jacobs, who are on track to win a second title in this FEI Vaulting World Cup Final, after their victory last year.