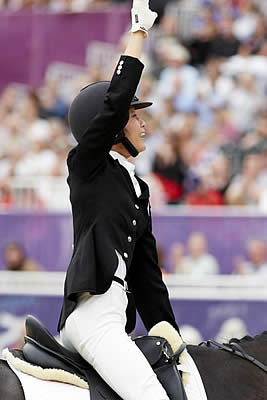 Lausanne (SUI), 17 July 2014 – The three remaining Athlete Representatives that will form the Athletes’ Committee and also serve on the respective Technical Committees have now been finalised following the closure of the second ballot in the online FEI Athletes Election 2014.

The Athlete Representatives for Jumping, Eventing and Para-Equestrian Dressage are:

None of these candidates had received a simple majority of the votes cast during the first ballot (15 April – 1 June 2014) and, as a result, a second ballot was held (16 June – 16 July) with two candidates per discipline.

The appointed FEI Athlete Representatives in each discipline will also form the FEI Athletes’ Committee, which will convene when the FEI Technical Committees require feedback on areas relevant to all FEI athletes.

The term in office of the athlete representative on the Technical Committees will start on 15 December 2014, at the same time as those of all other new Committee members. Athlete Representatives are the only members of any FEI Committee that can sit on two committees at any one time.

The 2014 athlete elections were the first time in the FEI’s 93-year history that the athletes themselves had the opportunity to vote for their Athlete Representatives. A total of 26 candidates from 10 nations stood for election, and the elections were conducted via a secure online voting platform, where the curriculum vitaes of all athlete candidates were made available.

FEI registered athletes aged 18 years and over who were included on their respective Ranking Lists from 31 December 2013 were eligible to vote for their Athlete Representative.