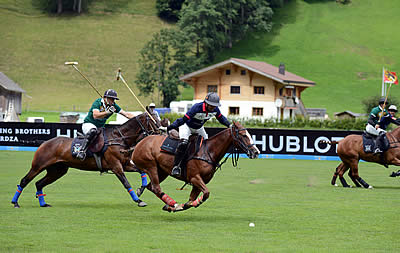 Saturday 23 August 2014 – The spectators at the Hublot Polo Gold Cup Gstaad Tournament were treated with two captivating semi-final matches on the third day of an action packed Tournament. Team Gstaad Palace beat Team Banque Brothers Sturdza SA, in what could be argued the hardest fought match of the Tournament so far, with a final score of 7 – 5.5. In the second semi-final, despite a noble fight from Team Vicomte A., it was Team E.I Sturdza Investment Funds who came out on top with a winning score of 7 – 4.5.

Team Gstaad Palace looked hungry to defend their 2013 Hublot Polo Gold Cup Gstaad title, setting the pace in the first semi-final match with threatening attacks, charging down the field. Jeronimo Fanelli (ARG) proved to be a formidable force as he scored two striking goals, catapulting Team Gstaad Palace into an early lead. A penalty gave David Bernal (ARG) an opportunity for Team Banque Baring Brothers Sturdza SA to make their first mark on the game. Successfully slotting the ball between the posts, Bernal’s goal clearly spurred the team into a valiant come back ending the first chukka half a goal behind Team Gstaad Palace 3 – 2.5.

Team Gstaad Palace looked to be striding towards victory as they entered the 4th chukka with a 6 – 3.5 lead. However, Team Banque Baring Brothers Sturdza SA came back fighting fiercely with two goals from Pedro-Fernandez de Llorente, in a matter of minutes putting them back into contention, once again trailing by just half a goal. Despite this magnificent fight from the worthy side of Team Banque Baring Brothers Sturdza SA, Jeronimo Fanelli (ARG) sealed the deal as he streaked away successfully with the ball to bring the final score to 7 – 5.5. Team Gstaad Palace now has the chance to defend their title in the prestigious Hublot Polo Gold Cup Final held tomorrow at 15:00.

In the second semi-final of the day, despite an admirable fight from Team Vicomte A., the pressure proved to be too much for them against the adept Team E.I. Sturdza Investment Funds. The spectacular performance of Eduardo Menendez proved to be unstoppable, scoring five out of Team E.I Sturdza Investment Funds’ seven goals in the match, allowing them to stride ahead of their opposition.

Entering the final chukka with a 3.5 goal advantage E.I Sturdza Investment Funds remained in charge adding one more goal to their tally to claim their second victory of the Tournament and earn a place in tomorrow’s final with a 7 – 4.5 triumph.

Team Gstaad Palace will now face Team E.I Sturdza Investment Funds in what is set to be a tense final tomorrow at 15:00 to determine which Team will be crowned the Hublot Polo Gold Cup Gstaad 2014 Champion. Team Banque Baring Brothers Sturdza SA plays Team Vicomte A. in the 3rd place playoff at 13:30.

Gualtiero Giori, the team captain of Team Gstaad Palace: “It was a tense close match; we were never leading by too much and were constantly under pressure from Team Banque Brothers Sturdza SA. We are happy to reach the final and defend our 2013 title.

“Our plan was to take a strong attacking approach in the first chukka, which we did successfully. As the match progressed we wanted to keep in control of the game so became slightly more defensive. When the final whistle blew we were happy with our well-deserved victory.”

Mohammed El Sewedi captain of Team E.I. Sturdza Investment Funds: “For us, that was a really tough game against Team Vicomte A.; we made sure we marked the opposition tightly which enabled us to win.

“This is our first time in Gstaad; the scenery is so beautiful and the tournament has been organised to a very high standard. It is a real honor for us to be competing in tomorrow’s final; we will do all we can to win!”

– The Polo Club Gstaad was founded in 1995 and the first polo tournament was held in 1996.
– In 2006 Pierre Genecand became President of both the Club and the Tournament.
– In polo, handicaps vary from -2 to +10 (+10 being the best level).
– The Polo Village will be open on Saturday and Sunday