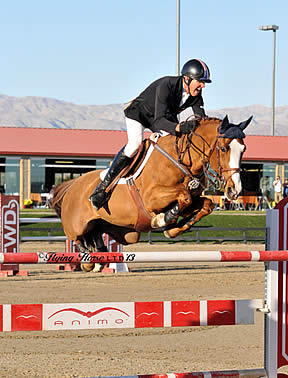 ©Flying Horse Photography. Rich Fellers and Flexible rode to the winner’s circle over an impressive field this weekend to collect first-place honors in the $25,000 SmartPak Grand Prix.

THERMAL, CA (March 2, 2013) – Fifty-three horse-and-rider combinations took the field, but it was the reigning World Cup winners who ruled the day Friday, when Rich Fellers and Flexible rode to victory in the $25,000 SmartPak Grand Prix, presented by Zoetis.

The rider from Wilsonville, Oregon and the chestnut stallion owned by Harry and Mollie Chapman, laid down a pair of sizzling rounds, although they were chased to the finish by Lane Clarke of Laguna Niguel, California and Horsemanship Unlimited’s Kiss the Sky, who finished second. Germany’s Meredith Michaels-Beerbaum and Windward Farm’s Unbelievable 5 placed third.

“He’s coming back into the zone,” said Fellers of Flexible, who finished in the money for all three HITS Desert Circuit CSI-W2* World Cup qualifier grand prix last month, scoring as high as third.

The duo presented one blazing round after another on a course well-suited to Flexible’s ability to shave time off the turns, turning in six strides where others were putting in eight. Brazilian designer Marina Azevedo’s track of 13 obstacles and 16 jumping efforts was set at up to 1.50m. It included three twisting loops, which was just technical enough to make, “Oh! Just that one rail,” a recurring theme from the announcer’s booth. Seventeen finished the first round with a single knock-down and eleven were clear.

In all, eleven combinations returned for the jump-off, including Tomba Mercedes Benz and Calavda, ridden by their owner Eduardo Menezes, who lives in Carlsbad, California, but rides for Brazil. Menezes was one of two jump-off riders to return on multiple horses; the other was Mexico’s John Perez, riding Zeidler Farm Canada, LTD’s Ranville and his own Utopia.

Menezes, who is sponsored by Mercedes Benz of Mexico, is known to be quite a speed demon. As the first in the ring for the jump-off, he established a formidable Great American Time to Beat of 35.65 seconds against a time-allowed of 45. He was followed by Perez on Ranville, who went clear, but was about a single second slower at 36.51, good for fourth.

Fellers and Flexible went next and when they broke the beam at 32.91 seconds, the audience was breathless. Clarke and Kiss the Sky, however, came close to catching them. With the clock at 33 seconds as they cleared the final jump the crowd let out a collective shriek, but it would be fractions of a second before they crossed the timers in 33.43, and Fellers and Flexible retained their lead.

“My horse was amazing,” Clarke said afterwards of his 15-year-old French mare. “I tried to pull out all the stops – I took the inside slice to the last fence, and I did a lead up to the in-and-out, a five stride for six after the skinny, but Rich and Flexible are amazingly fast.” By the time Menezes and Calavda entered the ring as the last pair in the jump-off, tension was at a fever pitch. They tried, but a time of 39.59 seconds and two rails put them in ninth.

“That’s Flexible!” added Fellers. “He had a nice little run for fun there. I let him open up and gallop a little, and he loved it.” Fellers and Flexible have set their sights on the AIG Thermal $1 Million Grand Prix, sponsored by Lamborghini Newport Beach, on March 17.

In the Level 5 FarmVet Jumper at 1.20m, it was Peter Breakwell of Menlo Park, California, and Hillstreet, owned by Connacht Sport Horse, who took the blue and pocketed the top prize. Helen McNaught of San Ramon, California and Carnutelabryere placed second, while Becky Warner of Scottsdale, Arizona rode Ashley Kaplan’s Aquilles to third.