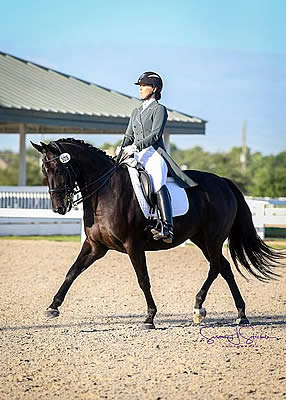 Austin, TX – November 13, 2017 – International Para-Dressage athlete Katie Jackson from Austin, Texas has been working hard in 2017 topping Grade V Para-Dressage with scores in the mid 70’s and recently earning her USDF Silver Medal and High Point Award in the Fourth Level Open Division in able-bodied Dressage. Only two years ago Jackson was just out of surgery and barely even walking after she was diagnosed with a rare, aggressive form of soft tissue cancer. Amputation of her right leg, above her knee, was the only option to make sure all of the cancer was removed from the area. Jackson made a commitment to herself to continue to do the sport she loved and aim for the world stage. With talent, hard work, and a strong support system Jackson and Royal Dancer, now owned by Jackson and her husband Yancy thanks to the generosity of Rachel and Julia Handt, have become a top duo on the Para-Dressage stage. Jackson’s list of accomplishments in two years include earning the United States Equestrian Federation (USEF) Lloyd Kramer Annual Sportsmanship Trophy, United Stated Dressage Federation (USDF) Grade IV Para Equestrian National Champion Number One Rider of the Year, helping to win four gold medals at each Nation’s Cup for Team USA in Florida and California, Awarded Women’s Sports Foundation 2017 Travel & Training Grant, and currently she is the third ranked FEI World Para-Dressage Grade V athlete. In September, Jackson topped Grade V at the US Equestrian 2017 Para-Equestrian Dressage National Championships and CPEDI3* in Tryon, NC. In October 2017, Jackson rode at the GAIG/USDF Region 9 Championships, Southwest Dressage Championships and Houston Dressage Society Autumn Classic where she earned her USDF Silver Medal and High Point Award in the 4th Level Open Division. Finishing off the year, Jackson was presented the Grade V 2017 Adequan®/USDF Para-Dressage Grade V Rider of the Year in addition to the All Breeds Para-Dressage Rider of the Year from the Westfalen Horse Association, for her accomplishments with Royal Dancer.

In Summer 2015, Jackson could only imagine where she would be weeks, months, and years down the road. In 2016, she was a brand new Para-Dressage rider and one year amputee competing at her first international Dressage competition. Jackson stated, “It has been an incredible year and I am so thankful to be able to be on this journey.  I have learned so much about myself, my riding, and what it takes to be a top competitor.  It is very rewarding to challenge my body and my mind to see what I can accomplish, especially now, as an amputee.”

Jackson has been a horse woman and athlete since she began riding at six years of age focusing on Dressage. She continued her riding even after graduating from the University of San Diego with a Bachelor in Arts and then from the UCLA School of Dentistry, beginning her dental practice in Austin, TX in 2007. She noted, “Earning my silver medal has been on my bucket list of goals. Even as a little girl I always dreamed about getting to wear the pretty shadbelly coat and riding at the FEI level.  I just never imagined I would be earning it so soon.  Earning this medal now, as a para-equestrian, makes it even more meaningful and special for me.”

Jackson is thankful to all of her support including her husband Yancy. She is also thankful to Austin Prosthetic Center who has helped to tell her story and keep her mobile so Jackson can continue living a life without limits. Jackson added, “I am extremely grateful to Kai Handt of North Texas Equestrian Center as well for believing in me and challenging me to ride at this level.   Kai’s support and coaching have aligned me for these successes and I am very thankful to be able to ride under someone with his knowledge and experience.”

Jackson is now aiming at the 2018 World Equestrian Games in Tryon, North Carolina and the 2020 Paralympic Games in Tokyo.

For more information about the USPEA, please visit www.USPEA.org or contact USPEA President: Hope Hand by e-mail: hope@uspea.org or by phone: (610)356-6481.