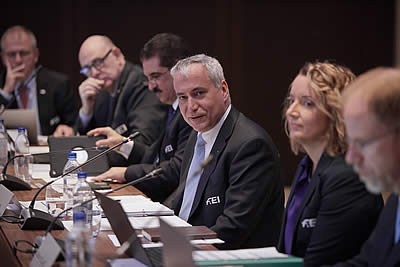 FEI President Ingmar De Vos opened the first in-person meeting of the FEI Board at the FEI General Assembly 2019 in Moscow (RUS) with a vote of thanks to outgoing Board members and a particular vote of thanks to the Russian hosts.

The President of Russia, Vladimir Putin, posted a personal message on the Kremlin website welcoming the FEI President and delegates of the FEI General Assembly to the Russian capital for the first time.

Persons whose terms of office have come to an end and who were personally thanked by the FEI President for their distinguished service include FEI Vice President H.E. Sheikh Khalid (BRN) and Chair of FEI Regional Group VII from 2006 to 2019, Sadyr Mamytov (KGZ), who has chaired Regional Group III from 2015 to 2019, Medical Committee Chair Dr Peter Whitehead (GBR) from 2009 to 2019), and FEI Tribunal Chair Henrik Arle (FIN) from 2011 to 2019. Betty Wates (JAM), who has chaired the FEI Nominations Committee since 2015, has also completed her four-year term.

The FEI Board, the body responsible for the general direction of the FEI and for all relevant matters not consigned to the General Assembly, held its meeting at the Hyatt Regency Moscow Petrovsky Park, venue for the full FEI General Assembly 2019.

Details of the main decisions and talking points at the meeting are available here.