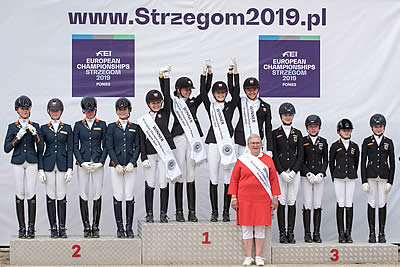 The dressage team from Denmark went for the gold medal at the FEI European Championships for Ponies. Silver medal went to the Netherlands, and bronze to Germany. The Polish team finished at the tenth position.

The Danish team competed in the following squad: Alexander Yde Helgstrand with Adriano B, Liva Addy Guldager Nielsen with D’artagnan 187, Nathalie Thomassen with Lykkehoejs Dream of Dornik, and Thilde Rude Hare with Morgensterns Dakar. 226,829 was their collective score.

“Competing as a team is stressful because you have to rely on other people and some things are out of your hands. It’s the first time Denmark has ever won, so it’s fantastic,” said the member of the winning team, Nathalie Thomassen.

The best individual result belonged to the current FEI rankings number one – Alexander Yde Helgstrand aboard Adriano B – 77,543.

“It’s amazing. It’s unbelievable. It was really close between all the teams, so it was quite stressful, but it ended up great,” said Alexander Yde Helgstrand.

Polish riders ended up on the 10th position, with 14 countries competing overall. The best score for Poland belonged to Tatiana Bierieznow with Gluckspilz – 69,743.

It’s not the end of dressage. From Friday to Sunday riders will present themselves and their ponies in the individual classes.

50 riders competed in the first class of the Pony European Championships in showjumping. 18 of them finished the class with zero penalty points. The best ride belonged to Linnea Ilsoee Madsen with Zee Tech, as they cruised over the course in amazing time of 64,97 seconds.

Three teams are clear: Germany, Great Britain, and France. Anything can happen in the final, as Italy, Ireland, and Denmark currently stand on the score of 4 penalties.

Poland is at the 10th position. The best result belonged to Aleksandra Osuch riding Rosa, as they finished the class with only one knockdown.