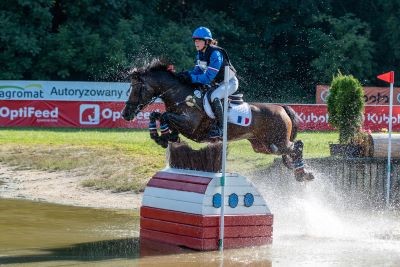 Rose Oatley took the individual gold medal after a great test with the 11-year-old Daddy Moon. German riders proved their amazing form, as they stood on the highest step of the podium both after the team and individual classes.

“I can’t really describe what happened today. I’m overwhelmed with my feelings. My pony was just amazing in the test. I can’t believe that we are now the European champions!” said the rider.

The silver medal went to the winner’s teammate, Antonia Roth riding Daily Pleasure WE, and Denmark’s Sophia Boje Obel Jorgensen with Adriano B took the bronze.

Polish rider Veronica Pawluk with D’Artagnan 187 finished in seventh place out of 63 competitors.

Saturday’s cross-country trial did not bring any changes to the top of the team leaderboard. The French still hold on to the best result with 96,4, Germany sits in second with 101,2, and the Irish are third with 116,3.

Mae Rinaldi from France held on to her lead after dressage with Boston du Verdon, even after time faults – now riding with 28,4.

Irish rider Ben Connors with Cornafest Fred went up to the second position (from the 11th) after a clear round inside the time; their result is now 30,03. Sophie Weening from the Netherlands is now third riding Hip Hop, with 30,04.