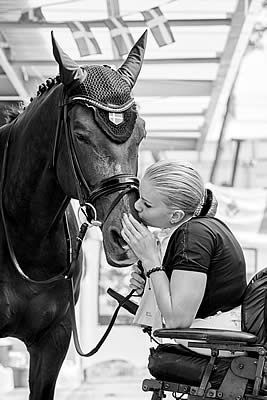 Lausanne (SUI), 23 September 2016 – The FEI is proud to announce that all human and equine samples taken during the Rio 2016 Paralympic Games have returned negative, making for back-to-back clean Paralympic games for para-equestrian sport, from both London 2012 and Rio 2016.

This follows the recent announcement by the FEI of back-to-back clean Olympic Games for the Rio 2016 and London 2012 Games.

“We are very proud of our efforts on clean sport at the FEI, working closely with our National Federations and all our athletes, and everyone involved should be proud of our clean Olympic and Paralympic Games record in 2016 and 2012,” FEI President Ingmar De Vos said. “We actively educated our athletes about the importance of clean sport before both Games in Rio and this is proof that our educational campaign is working. It’s the icing on the cake following such a successful Paralympic Games which saw amazing performances from 75 athletes representing 29 nations.”

A total of 38 equine samples were taken during the Games and sent for testing at the FEI’s Central Laboratory in Newmarket (GBR), one of the five FEI Approved Laboratories worldwide.

Human testing, which is conducted by the IPC during the Paralympic Games, also returned 100% negatives for the equestrian athletes that were sampled.

The Games also saw Uruguay field a para-equestrian athlete for the first time, and the host nation won bronze in the Individual Freestyle grade 1a with Sergio Olivia, the first Paralympic equestrian medal for Brazil since 2008.