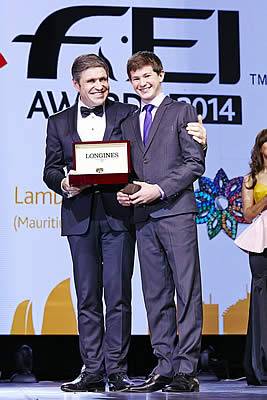 Lausanne (SUI), 14 September 2016 – With nominations for the FEI Awards 2016 closing on Sunday 18 September, there are just five days left for the global equestrian community to nominate their favourites for the categories of Rising Star, Best Athlete, Against All Odds, Best Groom and the Solidarity Award.

Everyone can nominate their heroes via the online platform at www.feiawards.org.

Award winners will be flown to the glittering FEI Awards Gala presented by Longines in Tokyo (JPN), in November, where their achievements will be celebrated by over 350 guests from the global equestrian community, representatives from the Tokyo 2020 and the FEI’s National Federations around the world.

“We’ve had a huge response to the Awards already this year showing how much equestrian has captured the imagination of fans across the globe, but keep those nominations coming in!” says FEI Secretary General Sabrina Ibáñez.

“Heroes, heroines, inspirational figures that never give up and make us think ‘wow’ are what the awards are here to celebrate, so get in touch and share with us who you deem should be recognised this year.”

There are five categories to vote in the FEI Awards 2016:

Nominations for the FEI Awards 2016 will close on Sunday 18 September.