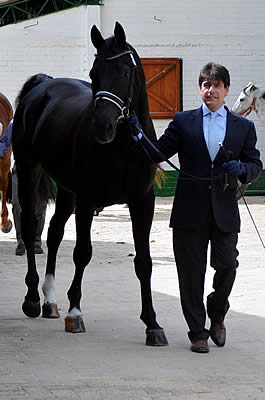 Bogota, Colombia (November 18, 2013) – Two-time Central American Games Dressage Gold medalist Cesar Torrente, a national judge since 1978, in 2010 began taking his expertise into the international judge’s box, judging extensively in the Latin American region at shows in Peru, Venezuela, Mexico, Honduras, Puerto Rico, and Ecuador, and later on in the USA, Germany, and Greece.  Within two years, he passed his examination in Stuttgart, Germany and became the first 2* judge promoted to 3* through the new 2013 FEI program. Now, the Bogota, Colombia-based attorney is looking to further serve his international dressage community by announcing his candidacy as Latin American representative for an open seat on the International Dressage Officials Club (IDOC) General Assembly.

IDOC is a Belgian nonprofit organization started in 1990 to promote classical horsemanship, ongoing education, and organizational support for dressage judges from an impartial, independent position.

“My interest with this candidacy is to support IDOC objectives to represent, unite, educate, promote and protect the international dressage officials community and foster higher and more consistent standards in judging,” says Torrente, who is announcing his intent at the same time as accepting the invitation of the Ecuadorian Federation to coach its dressage squad for the upcoming 2013 Bolivarian Games, November 21-25, in Lima, Peru.

Treveling the world while judging has provided Torrente with an excellent porspective on the gobal dressage community.  This combined with the fact that Torrente lives, trains, and competes in Latin America makes him an excellent choice for the IDOC’s Latin American representative seat.

While the IDOC has been in existence for almost twenty years, recent evolutions within the FEI have allowed the club to become a very important group representing judges as a stakeholder group. On that point Torrente says, “This is a big responsibility and challenge, but also a great opportunity.”

A corporate lawyer by profession, Torrente is respected throughout the dressage world as a ‘rider’s judge’ because of his empathy for what it is like to be in the judges’ box, as well as the ‘sandbox’ of the dressage arena.  Learn more about Cesar Torrente on his website,  www.dressagejudge.com.