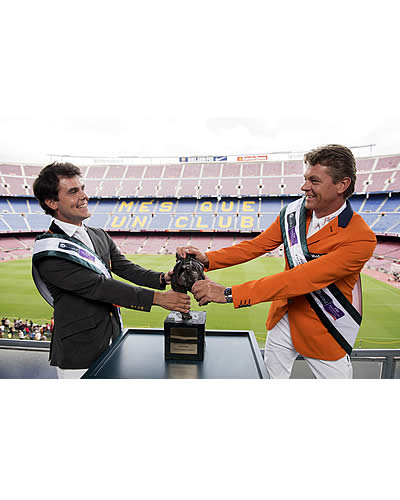 The Final, which takes place at the neighbouring Real Club De Polo de Barcelona (24-27 September), is the highlight of the world’s oldest team Jumping series, bringing together the best Jumping athletes from 19 nations that have qualified from all over the globe.

And for Spaniard Sergio Alvarez Moya, especially, the chance to walk down a players’ tunnel that has been graced by superstars like Barcelona heroes Lionel Messi, Neymar and Andres Iniesta and be pitchside where some of football’s most memorable action has unfolded, proved an awe-inspiring occasion.

“It’s an amazing feeling being here at FC Barcelona, even though my team is Real Madrid!” he said. “It won’t be long now before Barcelona and Catalonia welcome the world’s best Jumping athletes and thousands of equestrian fans to the Polo Club right next door.”

“The Barça player’s tunnel is really amazing with all the messages of support from fans,” said Jeroen Dubbeldam, who 10 days ago added the European title to his Sydney 2000 Olympic and 2014 world crowns. “Our sport is just as passionate and exciting as football, and we’ll all feel that competition fever again very soon in Barcelona when the Furusiyya Final gets underway, and the Dutch will be aiming to win it again this year!”

The three Jumping stars made their way pitchside to get a full view of the famous Nou Camp stadium, with its “More Than a Club” (Més Que un Club”) slogan.

“The ’More Than a Club’ idea really makes my heart beat faster,” said British teen sensation Jess Mendoza who, at 19, was the youngest British team member for nearly 40 years when she competed at the FEI European Jumping Championships 2015 in Aachen (GER) 10 days ago, helping Great Britain secure its place on the Rio 2016 Olympic startlist. “In our sport, you can’t do it alone; it’s all about team work. We’re like a big club, with a network of amazing grooms, vets, trainers, family and friends, whose only focus is to make sure you and your horse are ready to go out and win. The equestrian community is one big family and we’re all really close.”

“We are very happy to receive the elite of the show jumping world in our stadium,” Carles Vilarrubí, 2nd Vice-President of FC Barcelona said. “FC Barcelona is the reference point in world football and we welcome the best global events in other sports, and that’s exactly what the Furusiyya FEI Nations Cup Jumping Final at the CSIO Barcelona is, and that contributes to our city being on top of the sports world.”

Sergio Álvarez Moya: Spain’s most successful Jumping athlete started riding with his brothers at the age of seven. The 30-year-old made his international début in 1999, and at the FEI European Jumping Championships 2015 last month helped to secure Spain’s team jumping qualification for the Rio 2016 Olympic Games.
www.fei.org/bios/Person/10007927/ALVAREZ_MOYA_Sergio

Jess Mendoza: At just 19 years old, she became the youngest British team member for nearly 40 years when she competed at the FEI European Jumping Championships 2015 in Aachen (GER) 10 days ago, helping Great Britain secure its place on the Rio 2016 Olympic startlist. She began riding aged two, and by the age of seven she knew she wanted to become a professional rider. Now, her ultimate goal is to ride in Rio!
www.fei.org/bios/Person/10047109/MENDOZA_Jessica

On November 29, 1899, Hans Gamper founded Futbol Club Barcelona, along with 11 other enthusiasts of ‘foot-ball’, a game that was still largely unknown in Europe. He could never have imagined how huge that initiative would eventually become. With over 100 years of history, FC Barcelona, or Barça, has become for millions of people around the world a symbol of their identity, and not just in a sporting sense but also in terms of society, politics and culture.

Throughout the most difficult times, Barça was the standard that represented Catalonia and the Catalan people’s desire for freedom, a symbolism that has continued to be closely linked to the club and its members to this day.

The 2015 season, the third to be sponsored by Furusiyya as part of its €16m four-year sponsorship package, boasts 19 qualifiers around the world, with 45 nations being whittled down to just 19 for the spectacular €2.3 million showdown at the Real Polo Club of Barcelona (ESP) on 24-27 September.

Qualified nations to date are: Australia, Belgium, Brazil, Great Britain, Egypt, France, Ireland, Japan, Kingdom of Saudi Arabia, Mexico, Netherlands, Qatar, Sweden, Switzerland, USA and Venezuela. Spain, as the host country, gets an automatic place on the starting grid at the Barcelona Final. And Finland, Czech Republic, Denmark and Ukraine will be battling it out to claim the last two places at the Final at the qualifier in Arezzo on 4 September.
http://www.feinationscup.org