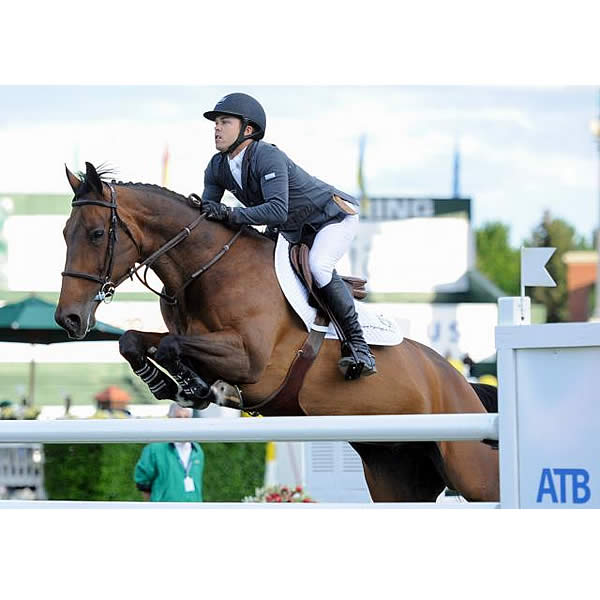 Watch a video of today’s highlights!

The $33,000 ATB Financial Cup 1.45m was the highlight competition of the day and the final one in the International Ring. The course designer in the International Ring this week is Werner Deeg of Germany. There were 49 entries in the ATB Financial Cup, but only one made it through the first round without faults. With a tight time allowed in the first round, it was difficult to go clear without jumping or time faults, and nine entries finished with one time fault.

Farrington and Blue Angel, an 11-year-old Warmblood mare by Luidam x Ascendent owned by Robin Parsky, posted a clear round in 77.968 seconds for victory. Darragh Kerins (IRL) and E Muze Yek, owned by Kerins and Maarten Huygens, were just over the 80-second time allowed in 80.899 seconds. Third place went to Charlie Jacobs (USA) on CMJ Sporthorse LLC’s Flaming Star, who crossed the timers in 81.918 seconds.

“Basically it just turned into a speed class, more or less,” Farrington remarked. “Everyone was trying to go as quick as they could and leave the jumps up. That horse is fast all by itself, so that probably played a big advantage today. I don’t think there was anything special that I did except use the horse’s natural speed and really watch my turns.”

Farrington said that Blue Angel is “an experienced horse that can win at a lot of places.” He continued, “I have big hopes for her in the future and it will be fun to see what she can do. She likes it here and the ground is great. It’s always tough competition and I’m happy to win.”

Blue Angel will compete in her first team competition in next week’s Furusiyya FEI Nations Cup at the ‘Continental’ Tournament.

It seemed like the rest of the field was going for second place after McLain Ward and Super Trooper de Ness, an 11-year-old Belgian Warmblood stallion by Vigo D’Arsouilles x Polydor owned by Grand Road Partners, galloped through the speed course in the $33,000 Enbridge Cup 1.45m. They went fifth in the order and stopped the timers in 64.310 seconds for victory, one second faster than second place finishers, Cadett 7 and Ashlee Bond (USA). Bond and Cadett 7, owned by Little Valley Farm, made a solid effort in 65.353 seconds and came closest to Ward’s time. Third place went to John Perez (COL) on Utopia, who finished in 67.474 seconds.

When asked if he thought his time would hold up, Ward replied, “I knew there would be a chance to be beat and it’s always nice to win, but I was really happy with the way the horse went in his first time in the big ring here. Everything is a bit new for the first time for him this year. It was nice to win.”

Ward explained that the reason Super Trooper is so speedy is thanks to his ability to keep the rails up without slowing down before the fence. “He felt really relaxed, and he’s naturally an incredibly careful horse, so you could let him go a little bit,” he said. “I loved the way he covered the ground because he’s a very, very careful horse. Sometimes he gets a little frozen and doesn’t cover the ground. But he felt loose in there and it’s wonderful footing, which helps. He’s a horse you never have to set up anywhere, you can kind of just stay on a lick. I think in the end, that makes him a faster horse than most horses. As long as you don’t make some kind of gross error, he’s going to get out of the way.”

Ward will continue to show Super Trooper de Ness this week with the aim toward preparing him for next week’s Furusiyya FEI Nations Cup.

McCrea and Romantovich Take One Find the Fast Path

The $33,000 Enbridge Cup 1.45m was held in a speed format with 48 entries starting. The fastest clear round was posted by Christine McCrea and Romantovich Take One, a 13-year-old KWPN gelding by Numero Uno x Karandasj owned by Candy Tribble. They finished faster by a large margin in 64.855 seconds. Second place went to Remarkable Farms LP’s Nice de Prissey and Brianne Goutal (USA) in 68.266 seconds, while Reed Kessler (USA) and Wolf S, owned by Iron Works Partners, were third with a time of 68.478 seconds.

McCrea did not watch anyone go before her since she was competing in another ring, but luckily she had the ride on Wannick WH earlier in the order, which gave her a good idea of how she could be faster with Romantovich Take One.

“It was a very nice course,” McCrea said. “You got to jump all over the field in the different parts of the ring. It wasn’t enormous; it was just a nice welcome back into the ring. The footing is just outstanding and it’s just perfect. I know him so well that I decided to go for the win and it worked out.”

This win marks yet another in a string of grand prix victories that McCrea has had over the past month, which included two at the Old Salem Farm Spring Horse Shows and two at HITS Saugerties. McCrea attributed her success with Romantovich Take One to three things, “He likes cooler weather, a little excitement, and he likes to travel around. I think all of those things have come into play the last couple of months, which has kind of perked him up a little bit. He loves it here.”

Today’s success was McCrea’s first win in the International Ring at Spruce Meadows. “That was my first time and it was so fun!” she said with a smile. “I’m really proud of it actually! It’s really cool.”

It was a fast jump-off for the opening competition, the $33,000 Friends of the Meadows Cup 1.60m, in the International Ring for the ‘National’ Tournament with Belgium’s Francois Mathy Jr. galloping to the win on Polinska des Isles, a 10-year-old Selle Francais mare by Diamant de Semilly x Valespoir Malabry owned by Team Harmony and Francois Mathy.

Mathy was one of five double clear rounds in a jump-off of nine entries. He and Polinska crossed the timers in 39.356 seconds, just edging out Olympian Reed Kessler (USA) and Cylana, who posted a time of 39.496 seconds. Third place went to Enrique Gonzalez (MEX) on Criptonite, who had a time of 41.892 seconds.

Polinska was successful at her last show, the La Baule CSIO 5*, in May. They placed fifth in the grand prix. Mathy said, “She’s been quite competitive since I’ve had her, so I’m really happy. She won her first grand prix at end of year at a three-star when she was eight. One year ago she started to do the big classes.”

Mathy competed with Polinska at the 2012 Spruce Meadows ‘Masters’ Tournament, so he felt comfortable taking her in the 1.60m in her first start out. “She knows the ring, which is a help when you start directly in a big class. The course was quite open, so I think that helped us get a bit into the rhythm,” he noted.

Although he didn’t see anyone go before him in the jump-off, Mathy planned to keep his turns tight and pace steady. “Daniel (Bluman) was in the lead and I knew he was quite fast. I just tried to keep everything tight and it seemed to work. I think where I had a good turn was to the double (combination). I think there I was quite tight and I think that helped me make up a bit of time. I didn’t see Reed’s round, but I saw she was just a little bit slower than me. That could have made the difference.”

Mathy plans to compete at all five weeks of the Summer Tournaments and was happy to win his first competition. “It’s a big investment for us when we come from Europe, so it’s super to start like that,” he remarked.