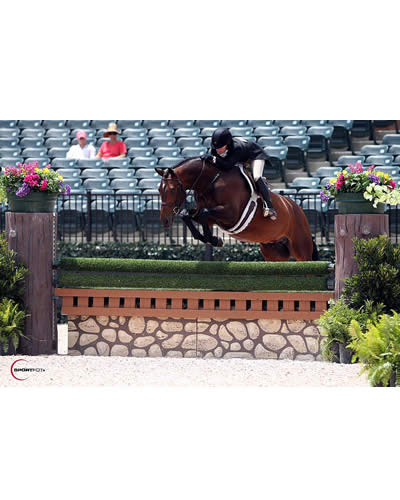 Farmer, who took home the $10,000 USHJA International Hunter Derby this past Friday aboard longtime mount, Mindful, finished her week at TIEC with a win on another rising talent in her ever-growing string, Point Being. The duo bested the class of 16 to take top honors, scoring an 87.5 in the first round and a 91 in the second. An ecstatic Farmer feels more prepared than ever heading to The Devon Horse Show next week, the next stop on their 2015 show schedule.

“This was a great week! I had him as a First Year horse last year and then he spent the winter in California so we just got him back shortly before the Lexington Spring Shows started. We went to Texas, where he ribboned, and then came here where he was third in the Derby,” said Farmer. “When we came back for the Handy round on Friday, I messed up. We’re still getting familiar with each other again.”

Point Being is a true star according to Farmer and just needs a little bit of refinement before truly coming into his own in the hunter ring. She continues to have high hopes for the gelding heading into the competitive part of the summer season.

“He’s always tries his hardest. It’s a benefit, but it can also be a detriment sometimes too because he tries so hard and sometimes it’s almost too hard,” she explained. “That is nothing you would ever want to fault him for though, because that’s what we love about him so much.”

Farmer’s trainer Larry Glefke agreed. “He can be a little bit difficult because of the fact that when he goes in the ring he doesn’t ever try and not jump over the top of the standards.” The beautiful bay gelding has the talent to excel in a both the hunters and the jumpers, but Glefke believes the experience in the hunter ring will do nothing but benefit the gelding moving forward in his career, whether that be in the hunter ring or possibly jumping around a Grand Prix.

“We’ve had some big time jumper riders and trainers tell us that we really need to take him over to the jumper ring. He’s only seven years of age, but we’ve always said, even if he makes it over in the other ring, this is incredible experience for him too,” said Glefke and Farmer agreed.

Competing the gelding has been a highlight for Farmer, who has always thought he would be excel under her tutelage. The duo has already been extremely successful upon his return and ultimately, Farmer will look towards USHJA Derby Finals with Point Being later in the summer in Lexington, KY.

“I’m so excited to have him back. I’ve always absolutely loved him, and I have a special place in my heart for horses that give you that much try and he brings that much intensity every time,” commented Farmer. “He’s always been one of my favorites.”

Farmer had four other rides in the class, finishing in second aboard Avatar Real Estate, LLC’s Dalliance, fourth on Jessica Stitt’s Taken, sixth piloting Kensel, LLC’s Mindful, and twelfth aboard Glefke & Kensel, LLC’s So to Speak, all of whom have the talent to win on any given day.

“Today’s class was lovely and the ring was beautiful. They built a great course, and the horses jumped really well. It’s so nice for this venue to give that kind of money for a hunter classic and the footing is beautiful and the facility is just tremendous,” said Farmer. “This was such a pleasant experience for us and the horses and J. P. Godard put on just a lovely show. We really couldn’t be happier with how this week went for us.”

Glefke agreed and continued with the sentiment. “This facility is just top-notch and with the grass rings they’re going to build, I truly love this place. We normally don’t come to shows that we haven’t been to before because we don’t know about the footing, but the footing here is absolutely sensational and the stabling is just world-class, plus I love the Roger’s Diner and the chocolate milkshakes,” he laughed.

“He’s a really quick horse, and he turns really well in the ring. I know I can ask him for the tight turns, and he’s super careful all the way around,” commented Waters. “I trust him at the jumps, and he’s confident in the ring, so I felt like he did a really great job for me today.”

The course had several tight inside turns that made riders work hard to finish clear and within the time allowed. Waters looked to take the risky turns, but knew that Carthesino Z would stay with her throughout the course.

“I definitely thought the inside turn to the last fence was going to be hard. I didn’t know if it was going to be faster to go inside or right around, but when I was riding and saw it, it was right there so I just took a chance and went for it and he handled it brilliantly,” she said.

Carthesino Z packs a lot of punch for his smaller and more compact frame. He can turn on a dime and made the 1.20m course look easy. Waters, who has been riding the gelding for a little bit over a year, has been impressed with his ability to step up to the plate and is looking to move him towards the High Amateur classes over the summer.

“He’s just the cutest thing I’ve ever seen. We started him mostly in the Lows and then we moved him to the Mediums when we were in Ocala this winter, so this is his first week back from his vacation after the winter season,” commented Waters. “I’m hoping to move him up to the Highs pretty soon at some point this summer.”

Waters competed two horses in the $50,000 Tryon Grand Prix held last night, May 16, under the lights in the George H. Morris Stadium. She piloted both mounts around the large Guilherme Jorge (BRA) with no jumping faults, adding only time penalties to both rounds. The numerous opportunities TIEC offers have made it a successful stop in her seasonal schedule this year.

“We came to TIEC last fall, and we decided that it was a place we wanted to continue competing at. The atmosphere is perfect and everything is so beautiful. The footing is also just top notch. Overall it’s a great show,” she said. “I’ve been able to gain valuable experience here, and we’re hoping to come back in July after we do Devon and Upperville later in the month.”

Madeline Thatcher of West Bluffdale, UT finished the class in second and third place. She rode to second aboard Skilliane De Varnel in 33.352 seconds and Dolce Vita to third in 33.943 seconds.

For more information on TIEC and a full list of results, please visit www.tryon.com. Please “Like” the TIEC Facebook page at www.facebook.com/tryonresort to be eligible for various contests and promotions.