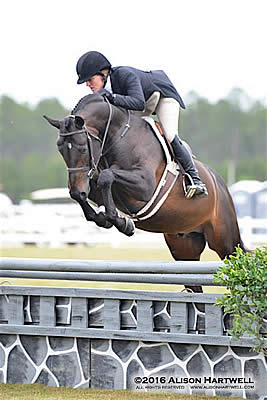 Kelley Farmer and It’s Me.

Kelley Farmer of Keswick, Virginia, winner of the $77,700 USHJA International Hunter Derby, presented by Brook Ledge Horse Transportation, won the class with Bibby Hill’s It’s Me. She also took the second place ribbon with Amanda Hone’s Publicized. She took fourth with Dani Brown Swanston’s Need I Say More as well as eighth and ninth places in the irons of Jane Gaston’s Taken and Kensel, LLC’s Clever Conversation and then wrapped up the class with Gaston’s Because in twelfth place.

Farmer led the way earning the highest Classic score of 172 with It’s Me. Their second round score of 194 locked them in for a total of 366 and the win.

Farmer and Publicized earned a first round score of 166. Combined with their Handy score of 192.50, their combined score of 358.50 would find them in second place.

Artillery Lane, LLC’s Chances R, ridden by Gregory Prince of Sherborn, Massachusetts, placed fifth overall after earning a Classic score of 151 and a Handy score of 185 for a total of 336.

Kris Killam of Naples, Florida in the irons of Barbara Fishman’s Mr. Big finished in sixth place overall after earning a first round score of 156 and second round score of 175 for a total score of 331.

Farmer returned for seventh with Jane Gaston’s Taken after earning a Classic score of 124 and a Handy score of 171 for a total of 295.

Farmer wrapped up the class with a twelfth place finish in the irons of Jane Gaston’s Because with a combined score of 237.