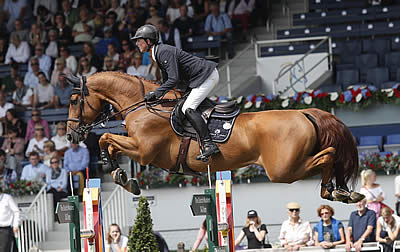 With eleven horse and rider combinations reaching the jump-off it was Dutch rider, Marc Houtzager, who put the pressure on his fellow competitors with a careful round in 50.13 seconds to secure the first clear on the scoreboard. But much to the delight of the home-crowd, Germany’s Daniel Deusser showed off his enviable skill to shave nearly three seconds off Houtzager’s time and with an eruption from the patriotic spectators, he took the lead. His position was not held for long, with Great Britain’s Ben Maher and the notoriously fast chestnut gelding, Explosion W, producing an electrifying round finishing in 46.28 seconds, a time that proved too difficult to beat.

Explosion W looks to be in amazing form; how did he feel during this first class?

It is his first time in Aachen; he hasn’t seen many arenas like this in his life yet, but when you put the tack on and you get on this horse, he makes you believe you can do anything. He makes my life and my job much easier than most!

There seemed to be few problems at the water; was that an issue for Explosion at all?

It wasn’t an issue for him, but it was an issue for me! I actually made a mistake. I made eight strides in the first round instead of nine. I had a kick in the head this morning from a fall, so maybe I can’t count anymore! But he made up for my small mistake and that’s the difference between an incredible horse like him and some of the other horses I have had.

It appeared to be quite a difficult course for the first 5* class at CHIO Aachen; what are your thoughts on this?

I agree, it was a difficult first class, but it creates good sport for the spectators to watch when they see a little drama like this in competition. It was a big course and, judging it on this, we now know what might be coming on Sunday for the Rolex Grand Prix.

CHIO Aachen is renowned as one of the best equestrian events in the world; how does it feel to win here?

Winning never gets old. I am very competitive! I think the difference with winning here is the size of the arena and the number of fans that are watching; we don’t have that in a sport normally. I think that’s what makes it even more special, to ride into this ring that has so much history and so many people following it; that’s why every rider wants to win here.