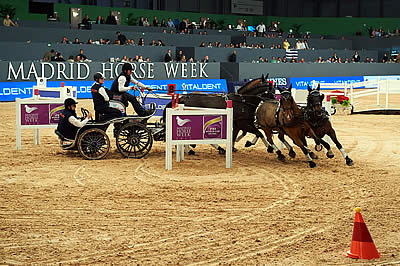 Madrid (ESP), 29 November 2015 – Boyd Exell claimed his second win in a row with victory at the inaugural edition of FEI World Cup™ Driving in Madrid (ESP) tonight, where Koos de Ronde (NED) finished second ahead of Swiss driver Jérôme Voutaz in third. Last weekend Exell also came out on top in the first leg of the new series at Stuttgart (GER), and today’s repeat success suggests the 43-year-old Australian is well on target for his fifth consecutive series title.

Madrid Horse Week hosted FEI World Cup™ Legs in Jumping, Driving and Vaulting this weekend, and the organisers were very pleased with the popularity of the Driving at the International Feria de Madrid (IFEMA).

The experienced German course designer Dr. Wolfgang Asendorf laid out a technical course for the seven competitors representing seven different nations. The wonderful atmosphere in the arena and the enthusiastic spectators contributed to the success of this first big Driving event at the Spanish fixture.

For Boyd Exell the choice to compete in Madrid or in Stockholm (SWE), which also hosted an FEI World Cup™ Driving leg today, was easy. “I could choose between sun and snow,” Exell said with a smile, “and I chose the sun! I also chose Madrid because of the good relationship I have with four-in-hand driver Ernesto Colman Mena (URU) who is the sponsor of this leg and Juan Real Garcia (ESP).”

Exell put down a magical first round and steered his four warmblood horses through a powerful and fast tour of the course, leaving all balls on the obstacles. He was some eight seconds faster than the fastest competitor so far, Jérôme Voutaz. Both of them qualified for the Winning Round, as well as Koos de Ronde.

Voutaz unfortunately knocked two balls down, and gave second starter De Ronde some breathing space. The bronze medallist of the FEI European Championships in Aachen went for it, but already had one knock down at the start of the course. The remainder of his drive he kept clear and he was happy with his second place behind Exell. “It is nothing to be ashamed of to finish second behind Boyd. My time in the winning round was nearly as fast as Boyd’s, so I am convinced one of us will manage to beat him this season!” the Dutch driver said.

Exell, however, did not have his best Winning Round. His left leader horse nearly tripped twice because of the loose footing, and in the first marathon obstacle the reigning World Cup Champion lost a few seconds when his horses kept spinning. “Two gates were taken out in the winning round and one was in an obstacle. My horses knew that from the three rounds before, and they were spinning,” explains Exell. “But I saw it coming early and was able to minimise the mistake and the time loss,” he added.

Jérôme Voutaz is a newcomer in the series this season. He competed before with a wild card in Geneva (SUI) and he opened his season in Madrid. “I panicked a bit,” said the sympathetic driver who is a car mechanic by profession. “The first night my horses were not waiting for me and I made too many driving mistakes myself as well. The arena in Geneva was so different. Everything is new for me here; I have watched videos of previous World Cup events to prepare myself, but it is not easy to compete against Boyd and the other competitors,” said the Swiss man who was, nevertheless, pleased with his results in Madrid.

Rainer Duen (GER), who was third at the first leg in Stuttgart, drove a nice clear round, but just came one second short to finish before Voutaz in the first round and finished fourth tonight. Belgium’s Glenn Geerts did the same at his first competition of this season and had to be satisfied with fifth place.

Both Colman Mena and Real Garcia competed with a wild card, and for both of them it was their first ever indoor driving experience.

They were both very happy and pleased to compete in such atmosphere. “I think this is a great opportunity for Spanish people to get to know carriage driving as a competition sport,” Garcia said.

Exell trains both four-in-hand drivers and was pleased with their performances. “They improved a lot during the competition. They did a very good job, especially Juan who had to prepare two teams, for both Ernesto and for himself.”