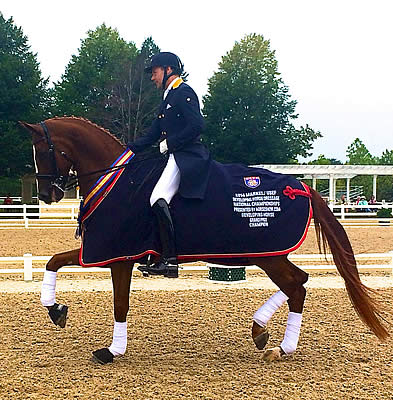 Wellington, FL (August 27, 2014) – “I believed in this horse from the day I sat on him and the more that I ride him the more I am convinced he has a bright future,” said Endel Ots, who showed Bethany Peslar and Everglades Dressage LLC’s Donatus to the horse’s first national title, Developing Horse Grand Prix Champion, at the 2014 Markel/USEF Young & Developing Horse Dressage National Championships the Lamplight Equestrian Center in Wayne, IL.

“His performance was fantastic,” Ots said. “I had the best tests all season! He was full of energy and with me a hundred percent. The piaffe passage tour was some of the best quality he has ever done. He scored highest in his piaffe, passage, and pirouettes. And what is amazing is he has only been schooling the Grand Prix movements for nine months.”

Donatus’ owner, Bethany Peslar, also recognized the horse’s potential from the start. “I have always predicted he could be a team horse,” said Peslar, “And this first National Championship is great step in demonstrating his potential. ‘Donnie’ is especially talented in the collected movements; he is a quick learner who aims to please, plus he is calm and focused in the show environment.”

Ots, who was lucky enough to show train and show Donatus this season, knows it takes a village to make a champion. “I thank Markel for sponsoring the show. The Young Horse and Developing Horse Championships are very important to developing future talent for the United States. I thank owners Bethany and Rose Peslar for giving me the opportunity to ride and train such a super horse, and I thank Evi Strasser for her coaching and training during the season and at the show. It was all integral to this success. And of course, thanks to my father, Max Ots, and my family for being there and cheering us on.”

Never one to rest on a saddle on laurels, Ots is keeping a pragmatic eye on a bright future: “Donatus will be relaxing for a bit and enjoying his success. He was purchased as an investment horse and will now be offered for sale,” Ots explained.

“In a perfect world, I would love a US sponsor to see the talent and potential in this horse and purchase him and allow me to continue to campaign him. He is an international horse with international talent, but I am a professional and understand my responsibilities. Meanwhile, Bethany has a Diamond Hit gelding coming up next year that we will be focusing on her showing in the Developing Grand Prix Championships next year. He has also has super talent for piaffe passage along with a huge extended trot.”

Everglades Dressage’s Bethany Peslar was just 21 years old when she earned her USDF Gold Medal in 2003, and in 2006 was named Brentina Cup National Reserve Champion. Her experience as a USEF High Performance Grand Prix rider has guided her in the selection, training and breeding of sport horses and with several up and coming prospects in the Everglades barn, she is already as excited as Ots about next year’s championships. To learn more, visit www.evergladesdressage.com.